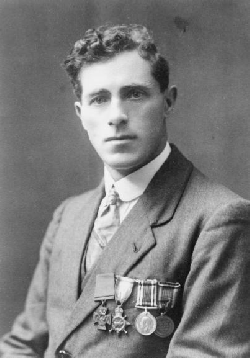 Horace Augustus Curtis VC (7 March 1891 &ndash; 1 July 1968) was an English recipient of the Victoria Cross, the highest and most prestigious award for gallantry in the face of the enemy that can be awarded to British and Commonwealth forces.

Curtis was born on 7 March 1891 in St Anthony-in-Roseland, Cornwall. He enlisted after war broke out in August 1914, and passed fit for duty on 12 September. He was attested into The Duke of Cornwall’s Light Infantry (DCLI) at Bodmin on 14 September as No.15833 Private Curtis. However, four days later he was transferred to the 7th Battalion of the Royal Dublin Fusiliers.

Recruiting in Ireland in August 1914 was not as satisfactory as in Britain and in consequence, Lord Kitchener decided early in September to transfer a number of recruits for whom no room could be found in English regiments to fill up the ranks of the 10th Division. Despite these transferees, the Division and its battalions consisted of Irishmen (apart from the 10th Battalion Hampshire Regiment) The 7th Battalion Royal Dublin Fusiliers had just started forming up in August at Naas in Ireland and presumably Horace proceeded there to commence his training at the Curragh in County Kildare. The 30th Brigade moved to Dublin in February 1915 and then embarked for England in May 1915 and onto the Basingstoke area where intensive training of the 10th Division took place for the next 3 months. During that time, The Division was inspected by King George V on 28 May at Hackwood Park and by Field Marshal, Lord Kitchener on 1 June.

As a result of these inspections the following Divisional Orders were issued:

"Lieutenant-General Sir B Mahon received His Majesty’s command to publish a divisional order to say how pleased His Majesty was to have had an opportunity of seeing the 10th Irish Division and how impressed he was with the appearance and physical fitness of the troops. His Majesty, the King recognises that it is due to the keenness and co-operation of all ranks that the 10th Division has reached such a high standard of efficiency. The General Officer Commanding 10th Irish Division has much pleasure in informing the troops that Field-Marshal Earl Kitchener of Khartoum, the Secretary of State for War, expressed himself as highly satisfied with all he saw of the 10th Division at the inspection today." Order no. 34 1st&nbsp;June 1915.

His VC is on display in the Lord Ashcroft Collection at the Imperial War Museum, London.

After almost 2 years here, the Division sailed for Alexandria in September 1917 for Egypt and the allied offensive against the Turks in Palestine. A further 8 months later in April 1918, the 6th Battalion of the Royal Munster Fusiliers and the 7th Battalion Royal Dublin Fusiliers had left the 30th Brigade, 10th Division and returned to Egypt in order to join units in France fighting the German advance.

The Division embarked from Devonport on 11 July 1915, the 7th battalion R. D Fus aboard H. M. T Alaunia and via Malta and Alexandria, the 7th landed at the island of Mitylene off the Turkish coast on 25 July 1915. Horace’s service with the Mediterranean Expeditionary Force (M. E. F) dated from 10 July 1915. The Battalion left Mitylene and landed at Sulva Bay, Gallipoli peninsular, Turkey on 7 August 1915.

Other parts of the Division had been engaged with the enemy prior to the 7th Battalion arriving and had suffered severe losses, which was also to befall the 7th Battalion. In his book "The Tenth Division in Gallipoli" Major Bryan Cooper, who served with the Division, estimates that by the end of the Gallipoli campaign, the Tenth Division had lost 75% of its original strength killed or wounded. In his book "Ireland’s Forgotten 10th" Capt. Jeremy Stanley states 3,000 men were killed or died from wounds, 25% of the Division’s strength.

On 23 May 1918, the 7th Battalion left Alexandria and landed at Marsailles, France on 31 May. On 6 June the Battalion was reduced to a Cadre. Surplus personnel, of whom Horace was one, were absorbed by the 2nd Battalion Royal Dublin Fusiliers.

On 20 June 1918, Curtis returned to England where he went to Bermondsley Military Hospital in London for treatment for malaria, broken by a furlough, home leave to Fiddlers Green between 24 July until 3 August, the first time in four years.

He was finally cleared to return to his unit in France on 19 August and was back in France by 1 September and to the Front by 21 September.

On 18 October 1918, No. 14107 Sergeant Horace A Curtis, 2nd Battalion Royal Dublin Fusiliers fought in action near Le Cateau that earned him the Victoria Cross. The following is the official citation, which appeared in the London Gazette on 6 January 1919.

His VC was presented to him by King George V at Buckingham Palace on 8 March 1919.

After Gallipoli, the 10th Division sailed for the base island of Lemnos (Mudros Harbour) on 30 September and in early October left for the port of Salonica in Greece. During a long stay in the Macedonian theatre of war and bitter fighting, Horace earned promotion during 1916 from unpaid lance corporal on 7 February to full sergeant on 17 November 1916. He was also mentioned in Dispatches in the London Gazette on 21 July 1917.