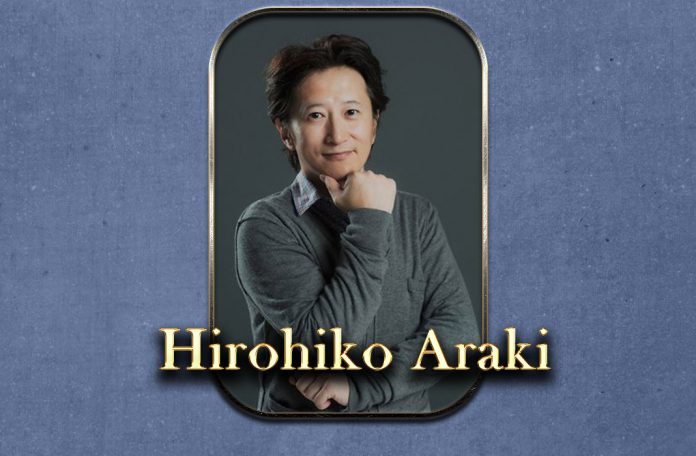 Hirohiko Araki was born on June 7, 1960, in Sendai, Miyagi is a Japanese manga artist. He is best known for his long-running series JoJo’s Bizarre Adventure, first published in Weekly Shōnen Jump in 1987 and which to date has sold over 70 million copies in Japan alone. The story is full of references to Western music and Italy, both of which Araki is reportedly very fond of.

Many of Araki’s creations have been translated and released in Europe, but so far only Part 3 of JoJo’s Bizarre Adventure, Baoh and Rohan au Louvre have been published in the United States. One popular theory is that Araki’s frequent references to Western music may violate American copyright laws. Viz Media has eluded much of this problem in JoJo’s Bizarre Adventure by replacing some band references with album or song references, which do not appear to be as strictly guarded. Araki grew up in Sendai, Japan with his parents and younger identical twin sisters. He cites his sisters’ annoyances as the reason he spent time alone in his room reading manga, naming Ai to Makoto as the most important one to him, and his father’s art books, he supposes this was his motive for drawing manga. After a school friend praised his manga, he began secretly drawing manga behind his parent’s backs. Hirohiko Araki submitted his first work to a magazine in his first year of high school. All his submissions were rejected while other artists his age or younger were making successful debuts. He decided to go to the publishers’ offices in Tokyo to find out why in person, taking a manga he stayed up all night to finish. The Shueisha editor he met highly criticised the work but said it had potential and to clean it up for the upcoming Tezuka Awards. The manga was Buso Poker.

Araki left the Miyagi University of Education before graduating and made his debut in 1980 with the wild west one-shot Buso Poker. Which was a “Selected Work” at that year’s Tezuka Award. His first serialisation was Magic Boy B.T. in 1982, about a young magician who solves mysteries. But the first series to display his signature amount of gore was 1984’s Baoh. It tells the story of a man who is implanted with a parasite by an evil organisation, giving him superhuman powers, and follows as he fights against them. It adapted into an OVA in 1989, the manga was released in the US by Viz Media in 1990 (in the tankōbon form in 1995), but the OVA didn’t get a stateside release until 2002. It wasn’t until Gorgeous Irene in 1985 that he really developed his signature art style of buff, muscular characters (it would later become more flamboyant). His next series would become his magnum opus, 1987’s JoJo’s Bizarre Adventure. The series takes place in 1880’s England and follows Jonathan Joestar (JoJo) and his adopted brother Dio Brando, the latter eventually trying to kill their father to get the inheritance. When confronted, Dio puts on an ancient mask that turns him into a vampire. JoJo then learns a martial arts technique called Hamon (or ripple) and travels to Dio’s castle to kill him. Subsequent arcs of JoJo follow different descendants of the Joestar family, and many are set in different parts of the world. Part 3, which would become the most popular, drops the vampire story and ripple technique and instead introduces the power of Stands, which continues in the series today.

In 2009, Hirohiko Araki was one of five artists selected by the Musée du Louvre to create original works set at the famous museum. His piece Rohan au Louvre starred JoJo’s Rohan Kishibe and shown at the exhibit titled Le Louvre invite la bande dessinée (“The Louvre Invites Comic-Strip Art”), which was created to show the diversity of comics, from January 19 to April 13. The following year, Rohan au Louvre was published in France and ran in Japan’s Ultra Jump. It was released in the US by NBM Publishing in February 2012.