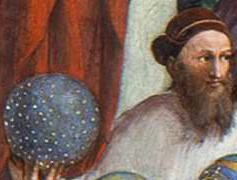 Hipparchus of Nicaea, or more correctly Hipparchos ( c. 190 BC – c. 120 BC), was a Greek astronomer, geographer, and mathematician of the Hellenistic period. He is considered the founder of trigonometry but is most famous for his incidental discovery of precession of the equinoxes.G J Toomer’s chapter "Ptolemy and his Greek Predecessors" in "Astronomy Before the Telescope", British Museum Press, 1996, p 81

Hipparchus was born in Nicaea, Bithynia (now Iznik, Turkey), and probably died on the island of Rhodes. He is known to have been a working astronomer at least from 162 to 127&nbsp;BC. Hipparchus is considered the greatest ancient astronomical observer and, by some, the greatest overall astronomer of antiquity. He was the first whose quantitative and accurate models for the motion of the Sun and Moon survive. For this he certainly made use of the observations and perhaps the mathematical techniques accumulated over centuries by the Chaldeans from Babylonia. He developed trigonometry and constructed trigonometric tables, and he solved several problems of spherical trigonometry. With his solar and lunar theories and his trigonometry, he may have been the first to develop a reliable method to predict solar eclipses. His other reputed achievements include the discovery and measurement of Earth’s precession, the compilation of the first comprehensive star catalog of the western world, and possibly the invention of the astrolabe, also of the armillary sphere, which he used during the creation of much of the star catalogue. It would be three centuries before Claudius Ptolemaeus’ synthesis of astronomy would supersede the work of Hipparchus; it is heavily dependent on it in many areas.

The Astronomer’s Monument at the Griffith Observatory in Los Angeles, California, USA features a relief of Hipparchus as one of six of the greatest astronomers of all time and the only one from Antiquity.

Late in his career (possibly about 135 BC) Hipparchus compiled his star catalog, the original of which does not survive. He also constructed a celestial globe depicting the constellations, based on his observations. His interest in the fixed stars may have been inspired by the observation of a supernova (according to Pliny), or by his discovery of precession, according to Ptolemy, who says that Hipparchus could not reconcile his data with earlier observations made by Timocharis and Aristillus. For more information see Discovery of precession.

Previously, Eudoxus of Cnidus in the 4th century BC had described the stars and constellations in two books called Phaenomena and Entropon. Aratus wrote a poem called Phaenomena or Arateia based on Eudoxus’ work. Hipparchus wrote a commentary on the Arateia – his only preserved work – which contains many stellar positions and times for rising, culmination, and setting of the constellations, and these are likely to have been based on his own measurements.

Hipparchus made his measurements with an armillary sphere, and obtained the positions of at least 850 stars. It is disputed which coordinate system(s) he used. Ptolemy’s catalog in the Almagest, which is derived from Hipparchus’ catalog, is given in ecliptic coordinates. However Delambre in his Histoire de l’Astronomie Ancienne (1817) concluded that Hipparchus knew and used the equatorial coordinate system, a conclusion challenged by Otto Neugebauer in his A History of Ancient Mathematical Astronomy (1975). Hipparchus seems to have used a mix of ecliptic coordinates and equatorial coordinates: in his commentary on Eudoxos he provides stars’ polar distance (equivalent to the declination in the equatorial system), right ascension (equatorial), longitude (ecliptical), polar longitude (hybrid), but not celestial latitude.

As with most of his work, Hipparchus’ star catalog was adopted and perhaps expanded by Ptolemy. Delambre, in 1817, cast doubt on Ptolemy’s work. It was disputed whether the star catalog in the Almagest is due to Hipparchus, but 1976–2002 statistical and spatial analyses (by R. R. Newton, Dennis Rawlins, Gerd Grasshoff,Gerd Grasshoff: The history of Ptolemy’s star catalogue, Springer, New York, 1990, ISBN 3-540-97181-5 (Analyse des im "Almagest" überlieferten Sternenkatalogs) Keith Pickering and Dennis Duke, by , DIO: the International Journal of Scientific History,12 (2002).) have shown conclusively that the Almagest star catalog is almost entirely Hipparchan. Ptolemy has even (since Brahe, 1598) been accused by astronomers of fraud for stating (Syntaxis, book 7, chapter 4) that he observed all 1025 stars: for almost every star he used Hipparchus’ data and precessed it to his own epoch centuries later by adding 2°40′ to the longitude, using an erroneously small precession constant of 1° per century.