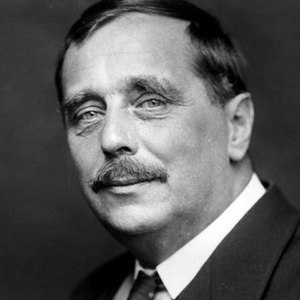 On the 21st of September in 1866 in a town Bromley of the English county Cant a boy, named Herbert George, was born, who was the third child of Joseph and Sarah Wells. He was a future greatest science fiction writer. His parents had worked as a gardener and a housemaid in one big and rich estate before the wedding, and when they married, they bought a crockery shop in Bromley. Trade of china brought them very little income, and the Wells family lived mainly on money, which Joseph earned playing crocket. He was a professional player and loved this game, but his wife, a very religious person, day and night reminded Joseph, that he was a failure and lived wrongly. She brought up her children in strictness, and the little Herbert considered mother’s religiousness and all surrounding reality small-minded and boring. He struggled with the surrounding world very easily – reading and dreaming.

When the boy was fourteen, a misery happened in the family – his father broke his leg and couldn’t play crocket any more. Sarah Wells started to work as a housekeeper, and the younger son sent to work in a manufactory shop. Herbert didn’t like this business – he wanted to become a scientist, not a dealer, and soon a muddle-headed student was returned to his parents. Mother tried to send him to the chemist’s shop as a student, but she needed to pay for teaching, and the payment turned out to be beyond their strength. Herbert worked for three years as a cleaner and a cashier, and in 1883 he managed to enter the Grammar School in the town Midherst. He managed to obtain a scholarship to continue education and went to London. Herbert Wells studied at Thomas Huxley in the biological department of Kings College in the London University. Thomas Huxley made a great influence on formation of the future writer’s personality. When Wells finished the university in 1888, he became Huxley’s assistant, and at the age of twenty five he got an academic title on biology.

In 1891 he got married for the first time, during all his youth Herbert hoped to find an ideal woman – an ally, assistant and sexual partner in one person. This man, who later earned the title of “the great womanizer” by right, didn’t have chance relationships. Women loved him – he wasn’t handsome at all, but he had a wonderful charisma, but the first woman in his bed was a wife, Isabella, his cousin. Their marriage was prompt, and didn’t live up to Herbert’s expectations. Both didn’t want children, who could strengthen their relationship, Wells was working as a teacher of exact sciences in a college and he didn’t have enough money to keep a big family. And they didn’t have other common interests with Isabella. In winter of 1893 Wells saw a very beautiful girl in the college. Emmy Catherine Robbins immediately fell in love with her teacher – and loved him all her life. For a year and a half Wells was rushing between two women and was even excluded from a so called respectable society for his immoral behaviour. His choice was Emmy at last, who he renamed after the wedding, like an oriental sovereign. They married in autumn of 1895, and the girl became Jane Wells.

In 1893 Wells occupied himself with journalism. He published several stories and articles, but they didn’t bring him fame. Then he started to write a novel – and this attempt was successful. Wells’ novel was named “The Time Machine”. It was published in summer of 1895 – and for several weeks raised its author on the top of popularity. Herbert Wells became not only a famous, but also a rich person0 he got huge honorariums and flattering offers from publishing houses. The next novel was “The Wonderful Visit”, then books, which secured him as a great science fiction writer were published – “The Island of Dr.Moreau”, “The Invisible Man”, and Wells devoted himself to literature.

“The War of the Worlds”, one of the most famous books of the writer, appeared simultaneously with the news about existence of canals on Mars – but as it had been written earlier, Wells was named a prophet. It is interesting, that his books confirm this gift of the writer – for example, “The First Men in the Moon”, where he made a description of flying in space, or “The War in the Air”, where possibilities of air forces were written. Ten years before Albert Einstein Wells told the world about four dimensions of space and said that the forth one was time, and in the novel “Men like Gods” he wrote about parallel worlds. But the most wonderful prognosis of the science fiction writer were referred to physics. In 1913 he wrote “The World Set Free” about facts, which twenty years later were also considered impossible. But later Herbert Well’s “idea” was absolutely confirmed. Moreover, he told the date in his novel – 1953, and was practically right – an atomic power plant was built in USSR in 1954. It was calculated, that seventy seven from eighty six prophecies of the writer were realized. Of course, Wells himself invented his ideas not for prophecies, but for the plot. Fantasy was a method, technique for Wells, with the help of it he told about the most topical problems of the real world. His novels “When the Sleeper Wakes”, “Men like Gods”, “The Food of the Gods” warned about the fact, that mankind’s destiny could be very sad. In 1903 Wells became a member of the London socialistic organization “Fabian”. It was some kind of a club, where rich people developed projects society’s prosperity. The writer was interested in it, but soon he quarreled with the leader of this organization and left the club. Though, owing to this experience a new novel “The New Machiavelli” appeared, it brilliantly represented “Fabians”.