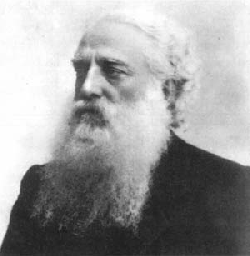 Colonel Henry Steele Olcott () (August 2, 1832 – February 17, 1907) was an American military officer, journalist, lawyer and the co-founder and first President of the Theosophical Society.

Olcott was the first well-known American of European ancestry to make a formal conversion to Buddhism. His subsequent actions as president of the Theosophical Society helped create a renaissance in the study of Buddhism. Olcott is considered a Buddhist modernist for his efforts in interpreting Buddhism through a Westernized lens.

Olcott was a major revivalist of Buddhism in Sri Lanka and he is still honored in Sri Lanka for these efforts. Olcott has been called by Sri Lankans "one of the heroes in the struggle of our independence and a pioneer of the present religious, national and cultural revival".

Olcott was President of the Theosophical Society until his death on February 17, 1907.

Two major streets in Colombo and Galle have been named Olcott Mawatha, to commemorate him. A statue of him has been built in front of Colombo Fort Railway Station. Many other schools that he helped to found or were founded in memory of him have commemorative statues in honor of his contribution to Buddhist education. He is still remembered fondly by many Sri Lankans today.

The date of his death is often remembered by Buddhist centers and Sunday schools in present-day Sri Lanka, as well as in Theosophical communities around the globe. Olcott believed himself to be Asia’s savior, the outsider hero who would sweep in at the end of the drama to save a disenchanted subcontinent from spiritual death.Prothero, Stephen. "Henry Steel Olcott and ‘Protestant Buddhism’" pg.295

The effort to revitalize Buddhism within Sri Lanka was successful and influenced many native Buddhist intellectuals. Sri Lanka was dominated by British colonial power and influence at the time, and many Buddhists heard Olcott’s interpretation of the Buddha’s message as socially motivating and supportive of efforts to overturn colonialist efforts to ignore Buddhism and Buddhist tradition. As David McMahan wrote, “Henry Steel Olcott saw the Buddha as a figure much like the ideal liberal freethinker – someone full of ‘benevolence,’ ‘gratitude,’ and ‘tolerance,’ who promoted ‘brotherhood among all men’ as well as ‘lessons in manly self-reliance”.McMahan, David L. The Making of Buddhist Modernism USA: Oxford University Press, 2008. McMahon 95. His view of Buddha influenced Sri Lankan leaders, such as Anagarika Dharmapala.

Olcott and Anagarika Dharmapala were associates, which reflects both men’s awareness of the divide between East and West—as seen in their presentation of Buddhism to the West.McMahan, David L. The Making of Buddhist Modernism. USA: Oxford University Press, 2008. Pg 95. Olcott helped financially support the Buddhist presence at the World Parliament of Religions in Chicago, 1893. The inclusion of Buddhists in the Parliament allowed for the expansion of Buddhism within the West in general and in America specifically, leading to other Buddhist Modernist movements.

It was Olcott who most eloquently articulated and most obviously embodied the diverse religious and cultural traditions that shaped Protestant Buddhism, who gave the revival movement both its organizational shape and its emphasis on education-as-character-building. The most Protestant of all early Protestant Buddhists, Olcott was the liminoid figure, the griot who because of his awkward standing betwixt and between the American Protestant grammars of his youth and the Asian Buddhist lexicon of his adulthood was able to conjure traditional Sinhalese Buddhism, Protestant modernism, metropolitan gentility, and academic Orientalism into a decidedly new creole tradition. This creole tradition Olcott then passed on to a whole generation of Sinhalese students educated in his schools.Prothero, Stephen. "Henry Steel Olcott and ‘Protestant Buddhism’" pg.296/297