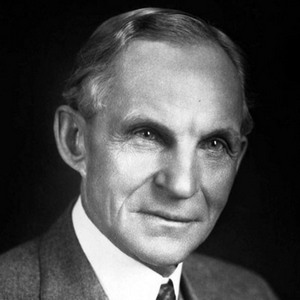 Henry Ford was born in Michigan in a farm near Detroit, in a family of a farmer, who was an expatriate Irish. In the childhood the future manufacturer was keen on constructing different mechanisms, he demolished and assembled everything that drifted his way: clocks, clockwork toys, alarms. At the age of twelve Henry for the first time saw locomotive and he was impressed by it’s power. Since that time Ford daydreamt of automobile machinery.

Henry studied in a village school where the quality of education was low. Ford is reported to make mistakes in writing till the end of his life. He didn’t like farm work at all and his kindred considered him to be a milksop. At the age of fifteen Ford was tired of living in a farm and standing father’s dissatisfaction, so Henry collected his stuff and went to Detroit without saying a word to his kindred. In Detroit he rented a room and found work in a repair shop. Nightly he had to make some money on the side repairing clocks and alarms. For four years Henry managed to make ends meet working in different companies and repair shops, and he got good skills in mechanisms’ repair.

In 1883 Ford returned to his kindred to live in his home farm, he began to use acquired skills – he was used as a service for repairing different mechanisms from clocks to agricultural machinery. Young Henry Ford went about the neighborhood with a case of tools and worked for everybody who could pay several dollars. Soon he started to make a decent livelihood. And as he was rather handsome he received a lot of women’s attention. Soon Ford got married to a village girl Clara Ala Bryant. They lived in a house which Ford built by himself. In 1893 they had a son Edsel Ford.

In that year Ford with his wife suddenly moved to Detroit where he started to work in Edison’s electric company. In several years Henry Ford became a chief engineer of the Detroit automobile company. Henry Ford devoted his spare time to construction of automobiles. His first car was Ford with four-cycle engine. Later Ford retired from the company, and in 1903 founded his own company “Ford Motor Company” and got 25% of shares. He invited self-taught engineers to work in his company as he was also a self-taught specialist.

In 1905 Henry Ford bought the control packet of shares of his company and became the president of it. And in three years he achieved great success after production of Ford T model. It was an easy-to-use, simple and cheap car which became very popular and initiated American love for automobiles. It was the last Ford’s invention which should always remain a masterpiece as he thought.

Ford became a millionaire, he bought airdromes, railways. His behavior seemed to be very eccentric for other people: he fought against Catholicism, saved birds, struggle for conclusion of piece during the World War 1. He determined the ground floor of salary for his workers which was three times bigger than in other companies as long as everybody lowered salary during the war. Till 30-s Ford led his company on his own, and after conflicts with labor unions he directed the control to his son. But in fact he didn’t let him stray another step, Ford controlled every action and decided everything by himself. After son’s death in 1943 Ford became the official president of the company again. In two years he appointed his namesake grandson to be the head of “Ford Motor Company”. In 1947 Henry Ford died at the age of 83 years.