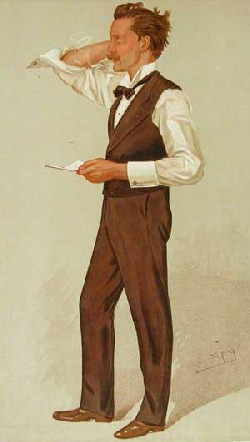 Henry John "Harry" Cockayne-Cust (10 October 1861 – 2 March 1917) was an English politician and editor who served as a Member of Parliament (MP) for the Unionist Party.

Cust was born to Sara Jane Cookson and Henry Cockayne-Cust, and was educated at Eton (where he was captain of the Oppidans) and Trinity College, Cambridge. While at Trinity College, he was elected to the Apostles and graduated with second-class honours in the Classical Tripos. Initially pursuing a legal career, Cust was admitted to the Inner Temple in 1888 but was not called. Instead he decided to enter Parliament, and won a by-election in 1890 for Stamford, Lincolnshire. He left Parliament during the general election, but returned five years later when he won a seat in the constituency of Bermondsey, remaining until 1906.

Cust was one of The Souls, and attached to Pamela Wyndham (who later married Edward Tennant). Others in the clique were Margot Asquith, Arthur Balfour, George Curzon, Alfred Lyttelton, Godfrey Webb, and George Wyndham. Considered a brilliant conversationalist by his contemporaries, he had a reputation as a womaniser and was the father of socialite and philanthropist Lady Diana Cooper, by the Duchess of Rutland, though this was not acknowledged until much later. Cust was also rumoured to be the natural father of Beatrice Stephenson Roberts, the mother of British prime minister Margaret Thatcher, and though there was no solid proof of this connection, Lady Diana Cooper often jokingly referred to Mrs. Thatcher as her niece.John Campbell The Grocer’s Daughter

In 1892, Cust met with William Waldorf Astor, who invited him to edit Pall Mall Gazette. Despite lacking any background in journalism, Cust accepted immediately. He soon transformed the newspaper into the best evening journal of the period, thanks in part to contributors such as Rudyard Kipling and H.G. Wells. Yet Cust rejected contributions submitted by Astor (who had literary aspirations); this, coupled with political disagreements, led to Cust’s dismissal in February 1896.Damian Atkinson, "Cust, Henry John Cockayne", in The Oxford Dictionary of National Biography, H.C.G. Matthew and Brian Harrison, eds. (Oxford: Oxford University Press, 2004), v. 14, p. 819.

After leaving the Pall Mall Gazette, Cust continued his career as an author. He wrote several poems, most notably "Non nobis domine".http://www.bartleby.com/101/876.html During World War I Cust was active in propaganda on behalf of the British Government. In August 1914, he founded the Central Committee for National Patriotic Organizations. He died in 1917 of a heart attack at his home in Hyde Park Gate, London. He was heir to the barony of Brownlow, a position which at his death fell to his brother, Adelbert Salusbury Cust (b. 1867).

As the result of a purported pregnancy, he married in 1893 Emmeline Mary Elizabeth Welby-Gregory (1867–1955), known as Nina, who was the daughter of Victoria, Lady Welby. The pregnancy was either false or a misrepresentation, and the couple, whose marriage was thereafter contentious, did not have any children. Nina Cust was a translator and editor of her mother’s papers. She and her husband are buried together in Belton, Lincolnshire, with a monument designed by her.

In 2009, it came to light that Cust was the great-grandfather of writer Allegra Huston, biological daughter of British peer John Julius Norwich and stepdaughter of American film-maker John Huston, via her grandmother, Lady Diana Cooper, Cust’s daughter via a covert liaison.

Anita Leslie, in her book Marlborough House Set, implies that Cust had many more children with aristocratic lovers than just Diana Cooper. She writes (pg. 248):

so much of the Cust strain entered England’s peerage, and that from such a number of cradles there gazed babies with eyes like large sapphires instead of the black boot buttons of their legal fathers.