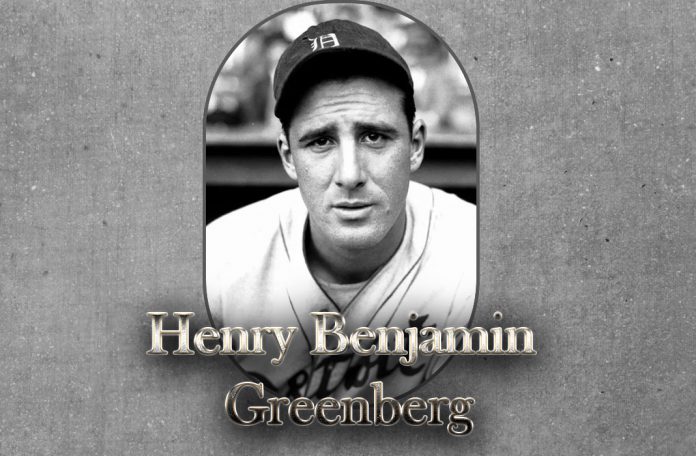 Henry Benjamin “Hank” Greenberg (January 1, 1911 – September 4, 1986), nicknamed “Hammerin’ Hank,” “Hankus Pankus” or “The Hebrew Hammer,” was an American professional baseball player in the 1930s and 1940s. A first baseman primarily for the Detroit Tigers, Greenberg was one of the premier power hitters of his generation. He hit 58 home runs in 1938, equaling Jimmie Foxx’s mark for the most home runs in one season by any player between 1927 (when Babe Ruth set a record of 60) and 1961 (when Roger Maris surpassed it).

Greenberg was a five-time All-Star, was twice named the American League’s Most Valuable Player, and was elected to the Hall of Fame in 1956. He became the first major league player to hit 25 or more home runs in a season in each league and remains the American League (AL) record-holder for most RBIs in a single season by a right-handed batter (183 in 1937, a 154-game schedule). In 1947 Greenberg’s contract was sold to the Pittsburgh Pirates, making him the first baseball player to earn over $80,000 a year. (He was paid $100,000, about $ today, plus $25,000 stipulated by his Detroit contract in the event of sale or trade). He was one of the few opposing players to publicly welcome Jackie Robinson to the major leagues.

Greenberg was the first Jewish superstar in all of the American professional sports. He attracted national attention in 1934 when he refused to play on Yom Kippur, the holiest of Jewish holidays, even though the Tigers were in the middle of a pennant race and he never claimed to be a religiously observant, practising Jew.

Greenberg is widely considered as one of the greatest sluggers in baseball history. Greenberg felt that runs batted in were more important than home runs. He would tell his teammates, “just get on base,” or “just get the runner to third,” and he would do the rest.

Off the field: Management and ownership

After the 1947 season, Greenberg retired from the field to become the Cleveland Indians’ farm system director and two years later, their general manager and part-owner along with Bill Veeck. During his tenure, he sponsored more African American players than any other major league executive. Greenberg’s contributions to the Cleveland farm system led to the team’s successes throughout the 1950s, although Bill James once wrote that the Indians’ late 1950s collapse should also be attributed to him. James, Bill The New Bill Janes Historical Baseball Abstract New York: Free Press (2001) p. 435 ISBN 0-684-80697-5 In 1949, Larry Doby also recommended Greenberg scout three players Doby used to play within the Negro leagues: Hank Aaron, Ernie Banks, and Willie Mays. The next offseason Doby asked what Indians’ scouts said about his recommendations. Said Greenberg, “Our guys checked ’em out and their reports were not good. They said that Aaron has a hitch in his swing and will never hit good pitching. Banks is too slow and didn’t have enough range [at shortstop], and Mays can’t hit a curveball.” When Veeck sold his interest, Greenberg remained as general manager and part-owner until 1957. He was the mastermind behind a potential move of the club to Minneapolis that was vetoed by the rest of ownership at the last minute.

Greenberg was furious and sold his share soon afterwards. In, Greenberg and Veeck teamed up for a second time when their syndicate purchased the Chicago White Sox; Veeck served as team president with Greenberg as vice president and general manager. During Veeck and Greenberg’s first season, the White Sox won their first AL pennant since 1919. Veeck would sell his shares in the White Sox in, and Greenberg stepped down as general manager on August 26 of that season.

After the 1960 season, the American League announced plans to put a team in Los Angeles. Greenberg immediately became the favourite to become the new team’s first owner and persuaded Veeck to join him as his partner. However, when Dodgers owner Walter O’Malley got wind of these developments, he threatened to scuttle the whole deal by invoking his exclusive rights to operate a major league team in southern California. In truth, O’Malley wanted no part of competing against an expansion team owned by a master promoter such as Veeck, even if he was only a minority partner. Greenberg wouldn’t budge and pulled out of the running for what became the Los Angeles Angels (now the Los Angeles Angels of Anaheim). Greenberg later became a successful investment banker, briefly returning to baseball as a minority partner with Veeck when the latter repurchased the White Sox in 1975.