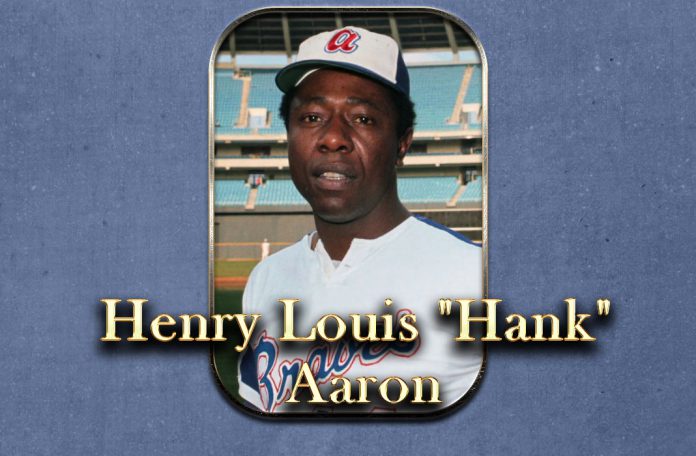 Henry Louis “Hank” Aaron (born February 5, 1934), nicknamed “Hammer”, or “Hammerin’ Hank”, is a retired American baseball right fielder who played 23 seasons in Major League Baseball (MLB) from 1954 through 1976. Aaron spent 21 seasons with the Milwaukee and Atlanta Braves in the National League (NL) before playing for the Milwaukee Brewers of the American League (AL) for the final two years of his career. Aaron is considered to be one of the greatest baseball players of all time. In 1999, The Sporting News ranked Aaron fifth on their “100 Greatest Baseball Players” list.

After playing with the Indianapolis Clowns of the Negro American League and in the minor leagues, Aaron started his major league career in 1954. In his final season, he was the last Negro League baseball player on a major league roster. His most notable achievement was breaking the career home run record set by Babe Ruth. During his career, Aaron performed at a consistently high level for an extended period of time. He hit 24 or more home runs every year from 1955 through 1973 and is the only player to hit 30 or more home runs in a season at least fifteen times.

Aaron made the All-Star team every year from 1955 through 197520 of Aaron’s 21 All-Star appearances were for the National League team. During his final appearance in 1975, the Brewers were a member of the American League. Currently, Milwaukee plays in the National League. and won three Gold Glove Awards. In 1957, he won the NL Most Valuable Player (MVP) Award, while that same year, the Braves won the World Series. Aaron’s consistency helped him to establish a number of important hitting records. He holds the MLB records for the most career runs batted in (RBI) (2,297), the most career extra-base hits (1,477), and the most career total bases (6,856). Aaron is also in the top five for career hits with 3,771 (third) and runs with 2,174, which is tied for fourth with Babe Ruth. He is one of only four players to have at least seventeen seasons with 150 or more hits. He also is in second place in home runs (755) and at-bats (12,364), and in third place in games played (3,298). At the time of his retirement, Aaron held most of the game’s key career power hitting records outright.

He started to play as a shortstop. After relocating to Indianapolis, Indiana, eighteen-year-old Aaron helped the Indianapolis Clowns win the 1952 Negro League World Series. As a result of his standout play, Aaron received two offers from MLB teams via telegram; one offer was from the New York Giants, the other from the then Boston Braves. Years later, Aaron remembered:

“I had the Giants’ contract in my hand. But the Braves offered fifty dollars a month more. That’s the only thing that kept Willie Mays and me from being teammates – fifty dollars.”

The Braves purchased Aaron from the Clowns for $10,000. On June 14, 1952, Aaron signed with Braves’ scout Dewey Griggs. During this time, he picked up the nickname ‘pork chops’ because it “was the only thing I knew to order off the menu.”http://chat.augustachronicle.com/stories/1999/07/11/bas_265377.shtml A teammate later said, “the man ate pork chops three meals a day, two for breakfast.”Barnstorming to heaven: Syd Pollock and his great Black teams. Alan J. Pollock, James A. Riley. 2006. pp.228

The Braves assigned Aaron to the Eau Claire Bears, the Braves’ Northern League Class-C farm team. The 1952 season proved to be very beneficial for Aaron. Playing in the infield, Aaron continued to develop as a ballplayer and made the Northern League’s All-Star team. He broke his habit of hitting cross-handed and adopted the standard hitting technique. By the end of the season, he had performed so well that the league made him the unanimous choice for Rookie of the Year. Although he appeared in just 87 games, he scored 89 runs, had 116 hits, nine home runs, and 61 RBI. In addition, Aaron hit for a .336 batting average. During Hank’s minor league experience, he was very homesick and faced constant racism, but his brother, Herbert Jr., told him not to give up the opportunity. Lauren, Spencer, Baseball’s Hall of Famers, The Rosen Publisher Group, Inc., New York, NY, 2003