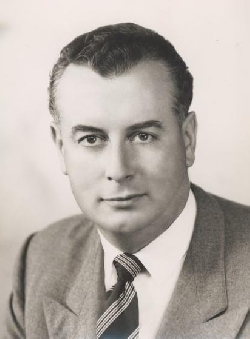 Edward Gough Whitlam, AC, QC (born 11 July 1916), known as Gough Whitlam ( ), served as the 21st Prime Minister of Australia. Whitlam led the Australian Labor Party (ALP) to power at the 1972 election and retained government at the 1974 election, before being dismissed by Governor-General Sir John Kerr at the climax of the 1975 Australian constitutional crisis. Whitlam remains the only Prime Minister to have his commission terminated in that manner.

Whitlam entered Parliament in 1952, as an ALP member of the House of Representatives. In 1960 he was elected deputy leader of the ALP and in 1967, after party leader Arthur Calwell retired, he assumed the leadership and became Leader of the Opposition. After narrowly losing the 1969 election, Whitlam led Labor to victory at the 1972 election after 23 years of Liberal-Country Coalition government.

In his time in office, Whitlam and his government implemented a large number of new programs and policy changes, including the elimination of military conscription and criminal execution, institution of universal health care and fee-free university education, and the implementation of legal aid programs. He won the 1974 double-dissolution election with a reduced majority. Subsequently, the Opposition, which controlled the Senate, was emboldened by government scandals and a flagging economy to challenge Whitlam. In late 1975, there was a weeks-long deadlock over the passage of appropriation bills, which was resolved by Kerr’s dismissal of Whitlam and commissioning of Opposition leader Malcolm Fraser as caretaker Prime Minister. Labor lost the subsequent 1975 election in a landslide.

Whitlam resigned from the leadership after the ALP lost again at the 1977 election, and left Parliament in 1978. With the advent of the Hawke government in 1983, he served as ambassador to UNESCO, and remained active in public life well into his nineties. The circumstances of his dismissal, and the legacy of his government, remain part of Australian political discourse.

Now well into his nineties, Whitlam remains well remembered for the circumstances of his dismissal. It is a legacy he has done little to efface; he wrote a 1979 book, The Truth of the Matter (the title is a play on that of Kerr’s 1978 memoir, Matters for Judgment) and devoted part of his subsequent book, Abiding Interests, to the circumstances of his removal. According to journalist and author Paul Kelly, who penned two books on the crisis, Whitlam has "achieved a paradoxical triumph: the shadow of the dismissal has obscured the sins of his government".

More books have been written about Whitlam, including his own writings, than about any other Australian Prime Minister. According to Whitlam biographer Jenny Hocking, for a period of at least a decade, the Whitlam era was viewed almost entirely in negative terms, but that has changed. Still, she feels that Australians take for granted programs and policies initiated by the Whitlam government, such as recognition of China, legal aid, and Medicare. Ross McMullin, who wrote a book on the history of the ALP, notes that Whitlam remains greatly admired by many Labor supporters because of his efforts to reform Australian government, and because of inspiring leadership.

Wallace Brown describes Whitlam in his book about his experiences covering Australian Prime Ministers as a journalist:

Whitlam was the most paradoxical of all Prime Ministers in the last half of the 20th century. A man of superb intellect, knowledge, and literacy, he yet had little ability when it came to economics&nbsp;… Whitlam rivalled Menzies in his passion for the House of Representatives and ability to use it as his stage, and yet his parliamentary skills were rhetorical and not tactical. He could devise a strategy and then often botch the tactics in trying to implement that strategy&nbsp;… Above all he was a man of grand vision with serious blind spots.