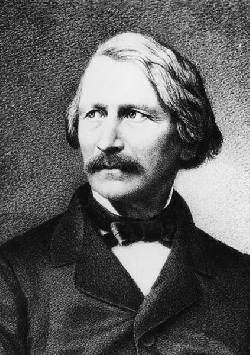 Gottfried Semper () (November 29, 1803 – May 15, 1879) was a German architect, art critic, and professor of architecture, who designed and built the Semper Opera House in Dresden between 1838 and 1841. In 1849 he took part in the May Uprising in Dresden and was put on the government’s wanted list. Semper fled first to Zürich and later to London. Later he returned to Germany after the 1862 amnesty granted to the revolutionaries.

Semper wrote extensively about the origins of architecture, especially in his book The Four Elements of Architecture from 1851, and he was one of the major figures in the controversy surrounding the polychrome architectural style of ancient Greece. Semper designed works at all scales, from a baton for Richard Wagner to major urban interventions like the re-design of the Ringstraße in Vienna.

Semper was born into a well-to-do industrialist family in Altona. The fifth of eight children, he attended the Gelehrtenschule des Johanneums in Hamburg before starting his university education at Göttingen in 1823, where he studied historiography and mathematics. He subsequently studied architecture in 1825 at the University of Munich under Friedrich von Gärtner. In 1826, Semper travelled to Paris in order to work for the architect Franz Christian Gau, and he was present when the July Revolution of 1830 broke out. Between 1830 and 1833 he travelled to Italy and Greece in order to study the architecture and designs of antiquity. In 1832 he participated for four months in archaeological research at the Akropolis in Athens. During this period he became very interested in the Biedermeier-inspired polychromy debate, which centred around the question whether buildings in Ancient Greece and Rome had been colorfully painted or not. The drawn reconstructions of the painterly decorations of ancient villas he created in Athens inspired his later designs for the painted decorations in Dresden and Vienna. His 1834 publication Vorläufige Bemerkungen über bemalte Architectur und Plastik bei den Alten (Preliminary Remarks on Polychrome Architecture and Sculpture in Antiquity), in which he took a strong position in favor of polychromy – supported by his investigation of pigments on the Trajan’s column in Rome – brought him sudden recognition in architectural and aesthetic circles across Europe .

On September 30, 1834 Semper obtained a post as Professor of Architecture at the Königlichen Akademie der bildenden Künste (today called the Hochschule) in Dresden thanks largely to the efforts and support of his former teacher Franz Christian Gau and swore an oath of allegiance to the King (formerly Elector) of Saxony, Anthony Clement. The flourishing growth of Dresden during this period provided the young architect with considerable creative opportunities. In 1838-40 a synagogue was built in Dresden to Semper’s design, it was ever afterward called the Semper Synagogue and is noted for its Moorish Revival style.H.A. Meek, The Synagogue, Phaidon, 1995, p. 188 Semper’s student, Otto Simonson would construct the magnificent Moorish Revival Leipzig synagogue in 1855.

Certain civic structures remain today, such as the Elbe-facing gallery of the Zwinger Palace complex. His first building for the Dresden Hoftheater burnt down, and the second, today called the Semperoper, was built in 1841. Other buildings also remain indelibly attached to his name, such as the Maternity Hospital, the Synagogue (destroyed during the Third Reich), the Oppenheim Palace, and the Villa Rosa built for the banker Martin Wilhelm Oppenheim. This last construction stands as a prototype of German villa architecture.

A convinced Republican, Semper took a leading role, along with his friend Richard Wagner, in the May 1849 uprising which swept over the city . He was a member of the Civic Guard (Kommunalgarde) and helped to erect barricades in the streets. When the rebellion collapsed, Semper was considered a leading agitator for democratic change and a ringleader against government authority and he was forced to flee the city.