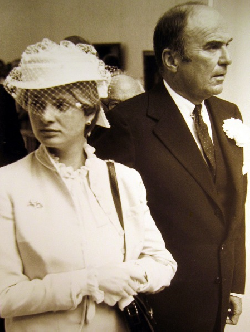 Although the German Federal government does not recognize "noble" or "royal" status per se, members of the former royal, princely, and noble houses of German descent use their "titles" which the German government regards as last names. As a courtesy and for ease of use, female members of these families use the feminized version of the family name.

Gloria was born on 23 February 1960, the daughter of Joachim, Count of Schönburg-Glauchau and of Beatrix, Countess Széchenyi de Sárvár-Felsővidék. Her brother, Alexander, Count of Schönburg-Glauchau, is a best selling writer and journalist. Her sister-in-law, Irina Verena, Princess of Hessen is a grand niece of Prince Philip, Duke of Edinburgh and Gloria herself is a relative of Sophie, Duchess of Hohenberg.

Although she was a countess, her family had little money, and she had worked as a waitress in the Swiss ski resort, St Moritz, before marrying Johannes Prinz von Thurn und Taxis, who was born in 1926.

Known as the punk princess and "Princess TNT", Gloria was an icon in the 1980s. She was known for her exuberant and lavish spending and whirlwind social life. However, on Johannes’s death, the spending came to a halt as massive taxes were due on the estate he left behind.

The couple had three children:

After her husband’s death, Princess Gloria acted as a trustee for her underage son, Albert II, the new head of the House of Thurn und Taxis. During the trusteeship, Gloria controlled the $2 billion Thurn und Taxis fortune.

In 2001, she was severely criticized for stating in a talkshow that the high AIDS-rate in African countries was due not to a lack of safe sex practices but to the fact that "the blacks like to copulate (‘schnackseln’) a lot". In 2008, she said in an interview that the reason for the higher copulate of blacks is the higher heat in Africa.