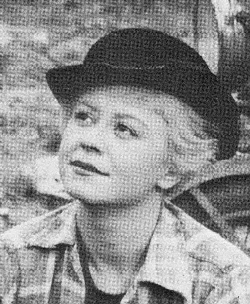 Giulietta Masina (22 February 1921 &ndash; 23 March 1994) was an Italian film and stage actress. She starred in La Strada and Nights of Cabiria, both winners of the Academy Award for Best Foreign Language Film, in 1956 and 1957, respectively. Masina won the Best Actress award at the 1957 Cannes Film Festival for the later film.

She was the wife and muse of the Italian film director Federico Fellini, in whom she found an artistic equal and collaborator. Owing to her intense performances of naïve characters dealing with cruel circumstances, Masina is often called the "female Chaplin".

Several months after her marriage to Fellini, in 1943, Masina suffered a miscarriage after falling down a flight of stairs. She became pregnant again; Pierfederico (nicknamed Federichino) was born on 22 March 1945, but died from encephalitis a month later on 24 April Information on miscarriage and death from encephalitis cited in Tullio Kezich, Fellini: His Life and Work (New York: Faber, 2006), 74.. Masina and Fellini did not have another child.

Masina died from lung cancer on 23 March 1994 at age 73, five months after her husband’s death on 31 October 1993. For her funeral, she requested that trumpeter Mauro Maur play "La Strada" by Nino Rota. She and her husband are buried together at Rimini cemetery in a tomb marked by a prow-shaped monument, the work of sculptor Arnaldo Pomodoro.

Masina turned to acting at university, particularly after 1941. She participated in numerous plays that included singing and dancing as well as acting, all in the Ateneo Theater of her university. In 1942, she joined the Compagnia del Teatro Comico Musicale and played various roles on stage. She was cast by Fellini, who picked her after seeing her photographs, in the radio plays he was writing at the time.

By 1943, Masina was gaining notice as a radio actress working beside some popular figures of those years. Her first job was Terziglio, a radio serial written by Fellini. It was about a young married couple and Masina played ‘Pallina’, the wife. Masina and Fellini fell in love. On 30 October 1943, they wed. Despite distancing herself from live theater, Masina did return to the university stage for some time acting with Marcello Mastroianni. Her last stage appearance was in 1951.

Working together with her husband, Masina made the transition to on-screen acting. Half of her Italian films, the most successful ones, were either written or directed by her husband. Masina made her film debut in an uncredited role in Rossellini’s Paisà (1946), credit for the script being given to Fellini. She received her first screen credit in Lattuada’s Without Pity (1948), which was another adaptation by Fellini and played opposite John Kitzmiller.

In 1954, she starred with Anthony Quinn in Fellini’s La Strada, playing the abused stooge of Quinn’s travelling circus strongman. In 1957, she won the Best Actress Award at the Cannes Film Festival for her portrayal of the title role in Fellini’s Nights of Cabiria. She played a prostitute who endures life’s tragedies and disappointments with both innocence and resilience. In 1960, Masina’s career was damaged by the critical and box office failure of The High Life. Subsequently, she became dedicated almost entirely to her personal life and marriage. Nonetheless, she again worked with Fellini in Juliet of the Spirits (1965), which earned both the New York Film Critics award (1965) and the Golden Globe award (1966) for Best Foreign Language Film.