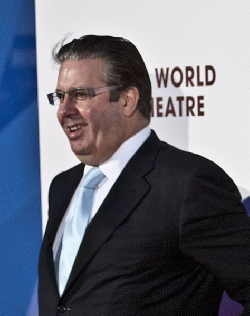 Gerard "Gerry" Ryan (5 June 1956 – 30 April 2010) was an Irish presenter of radio and television employed by Raidió Teilifís Éireann (RTÉ). He presented The Gerry Ryan Show on radio station RTÉ 2fm each weekday morning from 1988 until hours before his sudden death. He was presented with a Jacob’s Award for this show in 1990.

He married Morah Brennan in 1988 and they had five children: Lottie, Rex, Bonnie, Elliott and Babette. In 1997, Morah famously telephoned her husband’s show and, under the name Norah, told half a million listeners intimate details concerning his personal household habits. Gerry and Morah announced their separation in March 2008. He soon began a relationship with the former South African Ambassador to Ireland and the then UNICEF Ireland executive director, Melanie Verwoerd.

Ryan was found dead in his Dublin apartment on 30 April 2010. An inquest adjudged his death to have been caused by cocaine and alcohol consumption.

When they first married, the Ryans had very little money. Pat Kenny gave up a bed for Ryan and his wife to use while on honeymoon in Greece. Ryan obtained a mortgage by lying about his salary and bought a little house in Marino. The couple had some difficulty making their payments and they were constantly receiving reminders and even notices of foreclosure.

In March 2008, Ryan announced he and Morah were separating and called the separation "a very painful experience".

Later in 2008, he began a relationship with the former South African Ambassador to Ireland and the then UNICEF Ireland executive director, Melanie Verwoerd. In 2011, Melanie Verwoerd said she was “deeply shocked” to have been sacked from the charity because of the publicity surrounding her relationship with the deceased broadcaster.McGreevy, Ronan. . The Irish Times. 25 July 2011.

It was claimed that Ryan was known by some to be a cocaine user, allegedly offering to the former RTÉ Radio DJ Gareth O’Callaghan.. Daily Mail.. Daily Mail. Ryan’s former sister-in-law, Janice O’Brien said: "Many people who knew Gerry knew he took drugs. It was an accepted open secret for years. He used everywhere – birthday parties, Christmas parties. I’m not the only person in the world that knows this".Sweeney, Ken. . Irish Independent. 8 January 2011.

Ryan spent several days on a drip in hospital in 2006 due to dehydration after contracting the winter vomiting bug. He also underwent a much-publicised vasectomy which resulted in an infected wound.Ryan, Gerry. Would the Real Gerry Ryan Please Stand Up (Penguin Ireland, 2008). First published in The Irish Mail on Sunday, 12 October 2008, p.33

Ryan was noted for his love of fine food and wine. He was battling a weight problem for several years and had been taking Reductil (Sibutramine), a "slimming pill", which he said was effective and safe. Ryan conceded in his autobiography that he drank too much for his own good.. Irish Independent.

Ryan was born in Dublin in 1956. He described his father, Vinnie, as a "slightly eccentric" dentist from a Presbyterian background and his mother, Maureen, as "a flamboyant woman" who came from a theatrical background and worked in the theatre. His godfather was broadcaster Eamonn Andrews. He learnt to shoot with Charles Haughey’s children. He had two brothers, Michael and Vincent. He was educated at St Paul’s College, Raheny. Ryan’s mother died on Christmas Day 2006.