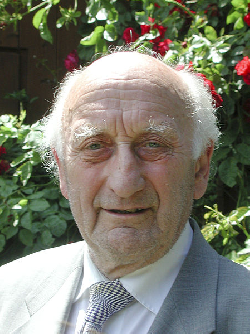 Bauer earned his Abitur in 1942 and served in the Wehrmacht (German armed forces) from 1943 to 1945. In 1946 he started studying mathematics and theoretical physics at Ludwig-Maximilians-Universität, Munich (until 1950). Since 1963, he worked as a professor of mathematics and (since 1972) computer science at Technical University of Munich. He retired in 1989.

Bauer’s early work involved the construction of computing machinery (e.g. the logical relay computer Stanislaus in 1951). In this context, he was the first to propose the widely used stack method of expression evaluation. Bauer also worked in the committees that developed the imperative computer programming languages ALGOL 58 and its successor ALGOL 60, important predecessors to all modern imperative programming languages. In 1968, Bauer coined the term Software Engineering which has been in widespread use since.

Bauer was an influential figure in establishing computer science as an independent subject in German universities.

His scientific contributions spread from numerical analysis (Bauer-Fike theorem) and fundamentals of interpretation and translation of programming languages, to his later works on systematics of program development, especially program transformation methods and systems (CIP-S) and the associated wide-spectrum language system CIP-L. He also wrote a well-respected book on cryptology, Decrypted secrets, now in its fourth edition.

Friedrich Bauer is married to Dr. Hildegard Bauer-Vogg. He is the father of three sons and two daughters.

Bauer was a colleague of the German Representative the NATO Science Committee. In 1967, NATO had been discussing ‘The Software Crisis’ and Bauer had suggested the term ‘Software Engineering’ as a way to conceive of both the problem and the solution."Mechanizing Proof: Computing, Risk, and Trust" By Donald MacKenzie

In 1972, Bauer published the following definition of software engineering: "Establishment and use of sound engineering principles to obtain economically software that is reliable and works on real machines efficiently."Bauer, F.L., "Software Engineering", Information Processing, 71, 1972