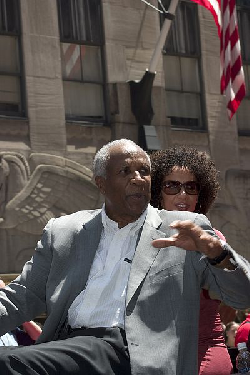 Frank Robinson (born August 31, 1935) is an American former Major League Baseball outfielder and manager. He played from 1956 to 1976, most notably for the Cincinnati Reds and the Baltimore Orioles. He is the only player to win league MVP honors in both the National and American Leagues.Great Baseball Feats, Facts and Figures, 2008 Edition, p.153, David Nemec and Scott Flatow, A Signet Book, Penguin Group, New York, ISBN 978-0-451-22363-0 He won the Triple crown, was a member of two teams that won the World Series (the 1966 and 1970 Baltimore Orioles), and amassed the fourth-most career home runs at the time of his retirement (he is currently ninth). Robinson was elected to the Baseball Hall of Fame in 1982.

Robinson was the first African-American hired to serve as manager in Major League history. He managed the Cleveland Indians during the last two years of his playing career, compiling a 186–189 record. He went on to manage the San Francisco Giants, the Baltimore Orioles, and the Montreal Expos/Washington Nationals.

Robinson managed in the winter leagues late in his playing career. By the early 1970s, he had his heart set on becoming the first black manager in the majors. In fact, the Angels traded him to the Cleveland Indians midway through the 1974 season due to his open campaigning for the manager’s job.

In 1975, the Indians named him player-manager, giving him distinction of being the first black manager in the Majors.http://espn.go.com/classic/biography/s/robinson_frank.html In his first at bat as player/manager of the Indians, he homered at Cleveland Stadium off Yankees pitcher Doc Medich.

He was awarded the American League Manager of the Year Award in 1989 for leading the Baltimore Orioles to an 87–75 record, a turnaround from their previous season in which they went 54–107. After Robinson had spent some years known in baseball as the Director of Discipline, he was chosen by Major League Baseball in 2002 to manage the Expos, which MLB owned at that time. The 2002 Expos performed surprisingly well, finishing 2nd in the NL East, and posting a 19-game improvement over 2001.

In 2005, the Montreal Gazette’s Stephanie Myles reported that Robinson had devoted much time playing golf during his years in Montreal, sometimes spending 16-hour days between the course and the games at night. Some journalists have questioned his disregard of statistics to determine pitching match-ups with his hitting line-ups. Robinson defended his style of managing by saying that he goes by his "gut feeling".

In a June 2005 Sports Illustrated poll of 450 MLB players, Robinson was selected the worst manager in baseball, along with Buck Showalter, then manager of the Texas Rangers. In the August 2006 poll, he again was voted worst manager with 17% of the vote and 37.7% of the NL East vote.

In 2005, one of Robinson’s Nationals players asked him if he had ever played in the majors. This was reported on Real Sports with Bryant Gumbel as an illustration of how little some current players are aware of the history of the game.

On Thursday, April 20, 2006, with the Nationals winning 10–4 against the Philadelphia Phillies, Robinson got his 1000th win, becoming the 53rd manager to reach that milestone. He had earned his 1000th loss two seasons earlier.

During a game against the Houston Astros on May 25, 2006, Robinson pulled Nationals catcher Matt LeCroy during the middle of the 7th inning, violating an unwritten rule that managers do not remove position players in the middle of an inning. Instead, managers are supposed to discreetly switch position players in between innings. However, LeCroy, the third-string catcher, had allowed Houston Astros baserunners to steal seven bases over seven innings and had committed two throwing errors. Although the Nationals won the game 8–5, Robinson found the decision so difficult to make on a player he respected so much, he broke down crying during the post-game interviews.