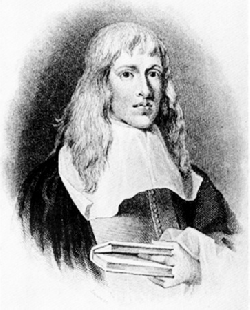 Francis Willughby (sometimes spelt Willoughby)Spelling variation of Willoughby Accessed 20 May 2007 (22 November 1635 – 3 July 1672) was an English ornithologist and ichthyologist. He was a student, friend and colleague of the naturalist John Ray at Cambridge University, and shared some of his expeditions and interests. Ray saw Willughby’s Ornithologia libri tres through the press after Willughby’s sudden death.

Willughby was born at Middleton Hall, Warwickshire to Sir Francis Willoughby and Cassandra Ridgway. He studied at Bishop Vesey’s Grammar School, Sutton Coldfield and Trinity College, Cambridge. In 1667 he married Emma Barnard, daughter of Sir Henry Barnard of Bridgnorth and London. They had three children. The first child, Francis, died at the age of nineteen, while his daughter Cassandra Willoughby married the Duke Chandos, who was a patron of Mark Catesby. His second son was Thomas, who became Baron Middleton, one of ten peers created by Queen Anne.Allen, Elsa G. (1951). "The History of American Ornithology before Audubon". Transactions of the American Philosophical Society, New Ser. 41 (3): 387–591. .

At Cambridge Francis Willughby was taught by the naturalist John Ray. In 1662 they travelled to the west coast of England to study the breeding seabirds. Between 1663 and 1666 they toured Europe together, travelling through the Netherlands, Germany, Switzerland and Italy. They separated at Naples and Willughby returned home via Spain. On returning to England they made plans to publish the results of their studies. Willughby died from pleurisy during the preparation of this work, but Ray published Willughby’s Ornithologia libri tres in 1676, with an English edition two years later. This is considered the beginning of scientific ornithology in Europe, revolutionizing ornithological taxonomy by organizing species according to their physical characteristics. Willughby and Ray were among the first to dismiss the older inaccuracies of Aristotle. Aristotle had claimed that swallows hibernated but Willughby and Ray (1678:212, quoted in Raven 1942:328) wrote: "To us it seems more probable that they fly away into hot countries, viz. Egypt, Ethiopia etc."Egerton, Frank N. (2003) A History of the Ecological Sciences, Part 18: John Ray and His Associates Francis Willughby and William Derham. Bulletin of the Ecological Society of America 86(4):301–313 Ray also published Willughby’s De Historia piscium (1686).

The Willughby family seat, Wollaton Hall, now owned by the City of Nottingham, houses Willughby and Ray’s natural history collection of stuffed animals and birds. The Willughby papers are amongst the Middleton collection held at the Nottingham University Library.