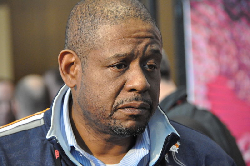 Forest Steven Whitaker (born July 15, 1961) is an American actor, producer, and director. He has earned a reputation for intensive character study work for films such as Bird and Ghost Dog: The Way of the Samurai, The Boston Globe. October 1, 2006. CBS News. February 4, 2007. for his work in direct-to-video films and for his recurring role as ex-LAPD Lieutenant Jon Kavanaugh on the award-winning television series, The Shield.Sternbergh, Adam. New York. January 9, 2006. Whitaker won an Academy Award, a Golden Globe and a BAFTA for his performance as Ugandan dictator Idi Amin in the 2006 film The Last King of Scotland.

Previously, in 2005, the Deauville (France) Festival of American Film paid tribute to him.Nesselson, Lisa. Variety. August 18, 2005. Whitaker was the recipient of the 2,335th star on the Hollywood Walk of Fame on April 16, 2007. The Insider. April 17, 2007. Accessed January 9, 2009. He received an Honorary Degree from Xavier University of Louisiana in 2009 at the 82nd Commencement Ceremony. Xavier University of Louisiana. Accessed January 9, 2009. He has also produced Monte Carlo.

Whitaker, who is a vegetarian, recorded a public service announcement with his daughter, True, promoting vegetarianism on behalf of People for the Ethical Treatment of Animals (PETA). PETA TV. He is also a supporter and public advocate for Hope North, a boarding school and vocational training center in northern Uganda for escaped child soldiers, orphans, and other young victims of the country’s civil war.

In politics, Whitaker supported and spoke on behalf of Senator Barack Obama in his 2008 presidential campaign. On April 6, 2009, Whitaker was given a chieftaincy title in Imo State, Nigeria. Whitaker, who was named a chief among the Igbo community of Nkwerre, was given the title Nwannedinamba of Nkwerre, which means A Brother in a Foreign Land.

Whitaker was inducted as a UNESCO Goodwill Ambassador for Peace and Reconciliation, in a ceremony at UNESCO headquarters on June 21, 2011. As Goodwill Ambassador, Whitaker works with UNESCO to support and develop initiatives that empower youths and keep them from entering or remaining in cycles of violence. At the induction ceremony, U.S. Ambassador to UNESCO David Killion described Whitaker as a "perfect choice as a Goodwill Ambassador…He has exemplified compassion in every area of his life, with humility and grace. He does this because it’s the right thing to do."

In May 2011, Whitaker co-founded with Dr. Aldo Civico the International Institute for Peace (IIP) at Rutgers University in Newark, New Jersey. Launched during the international Newark Peace Education Summit, IIP’s mission is to develop programs and strategic partnerships to address cutting-edge issues such as increasing citizen security through community-building; the role of women and spiritual and religious leaders in peace-building; the impact of climate change; and the reduction of poverty. Whitaker serves as chairman of IIP while Civico, who teaches sociology and anthropology at Rutgers-Newark, is the director. IIP operates under the auspices of UNESCO as a Category 2 Center.