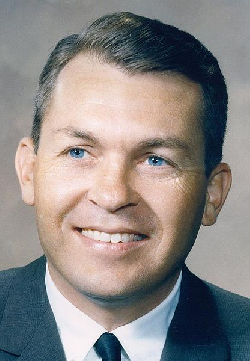 Elliot McKay See, Jr. (July 23, 1927 February 28, 1966), was an American astronaut, selected in the second group of astronauts. He died in 1966 in a NASA trainer jet crash in St. Louis while training for what would have been his first space flight, Gemini 9.

See was born in Dallas, Texas, and attended Highland Park High School. After initially attending The University of Texas where he was a member of Phi Kappa Psi Fraternity, he then attended the United States Merchant Marine Academy, graduating in 1949. He later obtained a masters degree from UCLA. He worked for General Electric before and after serving as a naval aviator from 1953 to 1956. He was married to Marilyn Denahy See, and had three children, Sally, Carolyn, and David.

See served as backup pilot for Gemini 5 and was in line to fly as Prime Crew Pilot for Gemini 8 but was promoted to be the Command Pilot of Gemini 9. According to chief astronaut Deke Slayton’s autobiography, Slayton did not assign See to Gemini 8 because he did not consider him physically capable of performing an extra-vehicular activity. Slayton further stated that he assigned See to Gemini 9 because he had become "sentimental" about getting him a flight.Slayton and Cassutt, pp. 167-168.

See and fellow astronaut Charles Bassett, assigned as Pilot for Gemini 9, were killed before their mission flew on February 28, 1966, when their T-38 trainer jet crashed into McDonnell Aircraft Building 101, known as the McDonnell Space Center, located 1,000 feet (300 m) from Lambert Field airport in St. Louis, Missouri. Building 101 was where the Gemini spacecraft was built, and they were going there to train for two weeks in a simulator, along with their backup crew. Ironically, See and Bassett died within 500 feet (150 m) of their spacecraft; both were buried in Arlington National Cemetery.

A NASA investigative panel later concluded that pilot error caused by poor visibility due to bad weather had been the principal cause of the accident. The panel concluded that See was flying too low to the ground during his second approach, probably as a result of the poor visibility. Slayton would later express doubts about See’s flying ability, claiming that See flew too slowly and "wasn’t aggressive enough."

The mission was launched three months later, in early June, as Gemini 9A. The shuffling of the Gemini prime and backup crew assignments that occurred after the deaths of See and Bassett impacted the crew selections for some of the early Apollo manned missions.