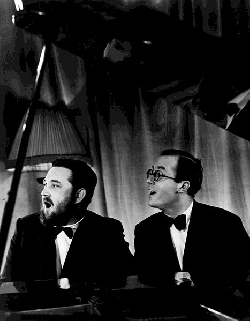 Donald Ibrahím Swann (30 September 1923 – 23 March 1994) was a British-Azerbaijani composer, musician and entertainer. He is best known to the general public for his partnership of writing and performing comic songs with Michael Flanders (see Flanders and Swann).

Donald Swann was born in Llanelli, Carmarthenshire, Wales. His father was a Russian doctor of English descent, from the expatriate community that started out as the Muscovy Company, and his mother was a nurse from Transcaspia. She was an Azerbaijani – they were refugees from the Russian Revolution. Swann’s great-grandfather, Alfred Trout Swan, a draper from Lincolnshire, emigrated to Russia in 1840 and married the daughter of the horologer to the Tsars. Sometime later the family acquired a second ‘n’ to their surname. His uncle Alfred wrote the first biography of Alexander Scriabin in English.

In 1941 Swann was awarded an exhibition to Christ Church, Oxford to read modern languages. In 1942 he registered as a conscientious objector and served with the Friends’ Ambulance Unit (a Quaker relief organisation) in Egypt, Palestine and Greece. After the war, Swann returned to Oxford to read Russian and Modern Greek.

In the 1970s, Swann became a Sponsor of the Peace Pledge Union.

Donald Swann was married twice; he married Janet Oxborrow in 1955 and they were divorced in 1983; his second wife was the art historian Alison Smith. In 1992 he was diagnosed with cancer. He died at Trinity Hospice in South London on 23 March 1994, survived by both wives and two children from his first marriage: Rachel and Natasha.