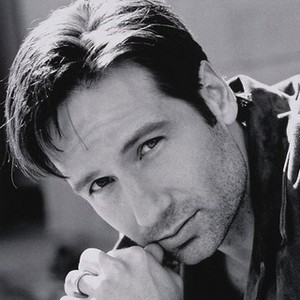 On the 7th of August in New York a boy, named David, was born. His father, Amram Duchovny, was Polish Jewish, who had emigrated in Canada from Russia, and later moved in USA. He tried to do different handicrafts and even was an author of a play. Moreover, Amram was known as a writer of political essays of the Jewish Committee of America. David’s mother, Margaret, was a pureblooded Scottish. She worked in school all her life.

David was the second child in this international family, he has elder brother Daniel and younger sister Lori. Probably, communication with brother and sister was enough for David, because he was very uncommunicative and even unsociable with neighbourly children. When the boy grew older, elder brother started to tease him, making an accent on his unsociability. Probably, only Scottish grandmother managed to find a proper approach to David – she occupied his attention and taught him to knit, and they spent whole evenings with sewing and knitting needles. David Duchovny remembers with nostalgia, that his first work was a knitted bedding for his beloved dog.

When David was eleven his parents divorced. This sad event influenced on the boy very seriously and made an extremely heavy impression, but mother made everything not to let her children need anything, and defined a goal to give them good upbringing and education. David was lucky – he became a laureate of a grant, which gave a right to study in the Male University School (Manhatten’s Cellective School), one of the most prestigious schools in USA. Mainly only children from rich and famous families got in this school, and David Duchovny remained perfect relationships with his school friends. incidentally, one of David’s classmates was an offspring from the famous family, John Kennedy junior.

David was a persistent and profound student in school. Probably, it was connected with the fact, that Protestant mother always told her children about importane of labour and possibility to gain high results if you make something. Besides school, David was keen on sports, and he liked basketball the most, and his next favourite sport was baseball. David graduated from the school with honours in 1978 and sent applications to study in best colleges of USA. Harvard, Yale, Browns and Princeton agreed, and David chose Princeton. When he finished education, he got a degree of a bachelor of English literature. During his study he never loathe any work and saved all earned money. It should be noticed, that in college he didn’t have high results in basketball. The reason was that David didn’t come to an understanding with the team’s trainer, ahnd he rarely put him in games. But David got a prize for competitive composition in college. His work was called “The Schizophrenic Critique of Pure Reason in Beckett’s Early Novels” and was an interesting and delicate analysis of Beckett’s art. Probably, this victory roused him to write a novel “when two are together”, in which David brightly showed pictures of dissolute life of a barman in New York. Many things in this novel are autobiographic, but the novel was never published.

David Duchovny’s personal life in college was rather monotonous. When he only started to study, he selected the aim, and with the help of cunning managed to get in a class, where his passion studied. He courted he till sense became mutual. They spent four years in college, but then broke up.

The next period oа David’s education was the Yale University. He entered the magistracy and not only got a diploma in the field of English literature, but also started to write a doctoral dissertation on the topic “Magic and Technology in contemporary Prose and Poetry”. But at the same time unexpectedly for everybody David became keen on the theatre and became a participant in several plays in university. He got a habit to make everything seriously and thoroughly and he even started to have lessons from Marcia Haufrecht, a famous teacher of dramatic art, who taught such famous and bright actors, as Ellen Barkin, Al Pacino, Alec Baldwin and Harvey Keitel. Soon David was invited to play in beer’s commercial “Lowenbrau” and he got nine thousand dollars for this work – it was twice more than his salary of an assistant of a university teacher. He felt the taste of actor’s income and started to study actors’ art with more zeal.