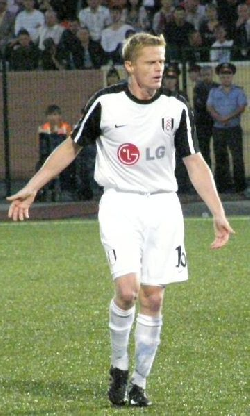 Damien Anthony Duff (born 2 March 1979) is an Irish footballer who plays for Premier League team Fulham. He played international football for Ireland for 14 years and participated in the 2002 FIFA World Cup and UEFA Euro 2012 competition, during which he captained the team. He is a member of the FIFA Century Club, having making his 100th international appearance against Italy at UEFA Euro 2012.

Duff has previously played for Blackburn Rovers, with whom he won the Football League Cup; Chelsea, where he won two Premier League titles and another League Cup; and Newcastle United where he won the 2006 UEFA Intertoto Cup. With Fulham he has played in the 2010 UEFA Europa League Final.

Duff played for the Republic of Ireland national under-19 football team in the 1997 UEFA European Under-18 Football Championship finals in Iceland, the 1997 and 1999 FIFA World Youth Championship. In Malaysia he scored the first ever Golden Goal in a World Cup match.

He made his senior début for the Republic of Ireland in 1998 against the Czech Republic. He has won 95 caps, making him the fifth most capped player in Irish history. He has started a total of 82 times for the Ireland senior squad, scoring eight goals.

He played every game for Ireland at the 2002 FIFA World Cup and was voted the team’s player of the tournament. After scoring against Saudi Arabia en route to the second round of the FIFA World Cup, Duff marked his goal with an oriental bow, in retrospect often referred to as one of the most memorable moments of his international career, with Asian fans still travelling to his club’s training ground ten years later to catch a glimpse of the player.

He was ever present for Ireland in their qualifying campaign for the 2006 World Cup but yet again Ireland failed to qualify. Duff’s former teammate Steve Staunton took over as manager but early defeats to Germany and a humiliating 5–2 loss to Cyprus saw Ireland fail to qualify again for a major tournament, followed by another change of manager.

Under the new manager Giovanni Trapattoni, Duff started the manager’s first game in charge against Serbia on 24 May 2008, which ended in a 1–1 draw. Duff became a key member of the squad proving assists for many of the goals. He started the matches in both legs against France as Ireland were controversially knocked out 2–1 on aggregate after extra-time.