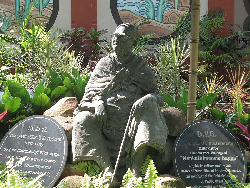 Devanahalli Venkataramanaiah Gundappa, popularly known as DVG, was a Kannada writer and philosopher. He is best known for Manku Thimmana Kagga, a collection of verses.

Gundappa was awarded Padmabhushan by the Government of India in 1974. The State of Karnataka under Chief Minister Sri Veerandra Patil honored him for his services to Kannada literature in 1970 at Ravindra Kalkshetra, Bengaluru and awarded a purse of Rs 90,000. DVG donated the entire award money to found the Gokhale Institute of Public Affairs (GIPA) located in Bull Temple Road, Basavanagudi, India. India Post issued a commemorative stamp of Dr. Gundappa in 1988.

In 2003, a statue was erected to honor DVG in Bugle Rock Park, Basavanagudi.

DVG was born in 1887 in Mulbagal/Mulabagilu taluk of Kolar district in the Indian state of Karnataka. He completed his primary school education in Kannada in 1898. He also leasrned English and Sanskrit as a result of his own interest. Later he continued his education in Mysore from the Maharaja high school. Despite failing to pass the matriculation exam (10th Standard) and discontinuing his formal education after that, his essays were selected as chapters for Graduation text books and as subjects of research theses. He worked in these areas:

He was closely associated with the Gokale institute of Public Affairs, Bangalore. Sri Nittoor Srinivasa Rao, The then Chief Justice of Karnataka, Sri Masti Venkatesa Iyengar, V.T.Srinivasan, the Principal of Vijaya College, Bangalore were some of his close associates.

DVG died on 7 October 1975. Chief Minister and several minsters of the state of Karnataka came to pay their last respects at his residence in Nagasandra road (now called DVG Road) in Basavanagudi.