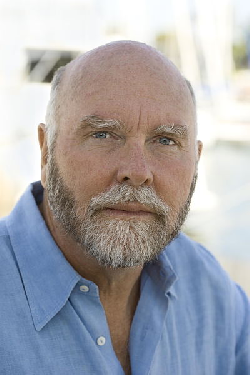 John Craig Venter (born October 14, 1946) is an American biologist and entrepreneur. He is known for being one of the first to sequence the human genome and for creating the first cell with a synthetic genome.http://www.jcvi.org/cms/research/projects/first-self-replicating-synthetic-bacterial-cell/overview/ Venter founded Celera Genomics, The Institute for Genomic Research (TIGR) and the J. Craig Venter Institute (JCVI), and is now working at JCVI to create synthetic biological organisms. He was listed on Time magazine’s 2007 and 2008 Time 100 list of the most influential people in the world. In 2010, the British magazine New Statesman listed Craig Venter at 14th in the list of "The World’s 50 Most Influential Figures 2010". He is a member of the USA Science and Engineering Festival’s Advisory Board.http://www.usasciencefestival.org/about/advisors retrieved 2010-07-05

Venter was born in Salt Lake City, Utah, the son of Elizabeth and John Venter. In his youth, he did not take his education seriously, preferring to spend his time on the water in boats or surfing. According to his biography, A Life Decoded, he was said to never be a terribly engaged student, having Cs and Ds on his eighth-grade report cards.

Although he was against the Vietnam War, Venter was drafted and enlisted in the United States Navy where he worked in the intensive-care ward of a field hospital. While in Vietnam, he attempted to commit suicide by swimming out to sea, but changed his mind more than a mile out. Being confronted with wounded, maimed, and dying soldiers on a daily basis instilled in him a desire to study medicine’Artificial life’ breakthrough announced by scientists, BBC, 21 May 2010. http://news.bbc.co.uk/2/hi/science_and_environment/10138849.stm — although he later switched to biomedical research.

Venter graduated from Mills High School and began his college career at a community college, College of San Mateo in California. He received his B.S. degree in biochemistry in 1972, and his Ph.D. degree in physiology and pharmacology in 1975, both from the University of California, San Diego. At UCSD, he studied under biochemist Nathan O. Kaplan. and married former Ph.D. candidate Barbara Rae.http://www.nndb.com/people/832/000163343/ After working as an associate professor, and later as full professor, at the State University of New York at Buffalo, he joined the National Institutes of Health in 1984.

In Buffalo, he divorced Dr. Rae-Venter and married his student, Claire M. Fraser, remaining married to her until 2005. In late 2008 he married Heather Kowalski. They live in La Jolla in San Diego, California where Venter gut-renovated a $6 million home.

Venter himself recognized his own ADHD behavior in his adolescence, and later found ADHD-linked genes in his own DNA.

While at the NIH, Venter learned of a technique for rapidly identifying all of the mRNAs present in a cell and began to use it to identify human brain genes. The short cDNA sequence fragments discovered by this method are called expressed sequence tags (ESTs), a name coined by Anthony Kerlavage at The Institute for Genomic Research. The NIH initially led an effort to patent these gene fragments, in which Venter coincidentally and controversially became involved. The NIH later withdrew the patent applications, following public outcry. Subsequent court cases declared that ESTs were not directly patentable.

Venter was passionate about the power of genomics to radically transform healthcare. Venter believed that shotgun sequencing was the fastest and most effective way to get useful human genome data. The method was controversial, however, since some geneticists felt it would not be accurate enough for a genome as complicated as that of humans. Frustrated with what Venter viewed as the slow pace of progress in the Human Genome project, and unable to get funds for his ideas, he sought funding from the private sector to fund Celera Genomics. The goal of the company was to sequence the entire human genome and release it into the public domain for non-commercial use in much less time and for much less cost than the public human genome project. The company planned to profit from their work by creating a value-added database of genomic data to which users could subscribe for a fee. The goal consequently put pressure on the public genome program and spurred several groups to redouble their efforts to produce the full sequence. DNA from five demographically different individuals was used by Celera to generate the sequence of the human genome; one of the individuals was Venter himself. In 2000, Venter and Francis Collins of the National Institutes of Health and U.S. Public Genome Project jointly made the announcement of the mapping of the human genome, a full three years ahead of the expected end of the Public Genome Program. The announcement was made along with US President Bill Clinton, and U.K. Prime Minister Tony Blair. Venter and Collins thus shared an award for "Biography of the Year" from A&E Network." On the 15 February 2001, the Human Genome Project consortium published the first Human Genome in the journal Nature, and was followed, one day later, by a Celera publication in Science. Despite some claims that shotgun sequencing was in some ways less accurate than the clone-by-clone method chosen by the Human Genome Project, the technique became widely accepted by the scientific community and is still the de facto standard used today.