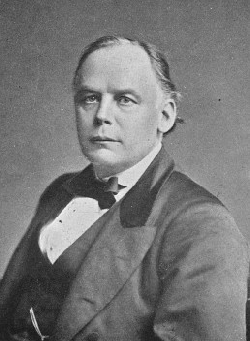 Charles Bradlaugh (26 September 1833 – 30 January 1891) was a political activist and one of the most famous English atheists of the 19th century. He founded the National Secular Society in 1866.

Born in Hoxton (an area in the East End of London), Bradlaugh was the son of a solicitor’s clerk. He left school at the age of eleven and then worked as an office errand-boy and later as a clerk to a coal merchant. After a brief spell as a Sunday school teacher, he became disturbed by discrepancies between the Thirty-nine Articles of the Anglican Church and the Bible. When he expressed his concerns, the local vicar, John Graham Packer, accused him of atheism and suspended him from teaching.See Bradlaugh-Bonner (1908, p.8); Headlingly (1888, pp. 5–6); Tribe (1971, p.18) He was thrown out of the family home and was taken in by Elizabeth Sharples Carlile, the widow of Richard Carlile, who had been imprisoned for printing Thomas Paine’s The Age of Reason. Soon Bradlaugh was introduced to George Holyoake, who organized Bradlaugh’s first public lecture as an atheist.

At the age of 17, he published his first pamphlet, A Few Words on the Christian Creed. However, refusing financial support from fellow freethinkers, he enlisted as a soldier with the Seventh Dragoon Guards hoping to serve in India and make his fortune. Instead he was stationed in Dublin. In 1853, he was left a legacy by a great-aunt and used it to purchase his discharge from the army.

Bradlaugh returned to London in 1853 and took a post as a solicitor’s clerk. By this time he was a convinced freethinker and in his free time he became a pamphleteer and writer about "secularist" ideas, adopting the pseudonym "Iconoclast" to protect his employer’s reputation.Edward Royle, ‘Bradlaugh, Charles (1833–1891)’, Oxford Dictionary of National Biography, Oxford University Press, Sept 2004; online edn, May 2008 He gradually attained prominence in a number of liberal or radical political groups or societies, including the Reform League, Land Law Reformers, and Secularists.

He was President of the London Secular Society from 1858. In 1860 he became editor of the secularist newspaper, the National Reformer, and in 1866 co-founded the National Secular Society, in which Annie Besant became his close associate. In 1868, the Reformer was prosecuted by the British Government for blasphemy and sedition. Bradlaugh was eventually acquitted on all charges, but fierce controversy continued both in the courts and in the press.

A decade later (1876), Bradlaugh and Besant decided to republish the American Charles Knowlton’s pamphlet advocating birth control, The Fruits of Philosophy, or the Private Companion of Young Married People, whose previous British publisher had already been successfully prosecuted for obscenity. The two activists were both tried in 1877, and Charles Darwin refused to give evidence in their defence. They were sentenced to heavy fines and six months’ imprisonment, but their conviction was overturned by the Court of Appeal on a legal technicality. The Malthusian League was founded as a result of the trial in order to promote birth control. He was a member of a Masonic lodge in Bolton, although he was later to resign due to the nomination of the Prince of Wales as Grand Master., from the Grand Lodge of British Columbia

Bradlaugh was an advocate of trade unionism, republicanism, and women’s suffrage, and he opposed socialism. His anti-socialism was divisive, and many secularists who became socialists left the secularist movement because of its identification with Bradlaugh’s liberal individualism. He was a supporter of Irish Home Rule, and backed France during the Franco-Prussian War. He took a strong interest in India.

Caricature from Punch, 1881 – "Mr. Bradlaugh, M.P., The Northampton Cherub" In 1880 Bradlaugh was elected Member of Parliament for Northampton. In order to take his seat and become an active Parliamentarian, he needed to signify his allegiance to the Crown and on 3 May Bradlaugh came to the Table of the House of Commons, bearing a letter to the Speaker "begging respectfully to claim to be allowed to affirm" instead of taking the religious Oath of Allegiance, citing the Evidence Amendment Acts of 1869 and 1870. Speaker Brand declared that he had "grave doubts" and asked the House for its judgment. Lord Frederick Cavendish, for the Government, moved that a Select Committee be set up to decide whether persons entitled to make a solemn affirmation in court were also allowed to affirm instead of taking the Parliamentary oath.Arnstein, p. 34-35. 3ser vol 252 cols 20-29.