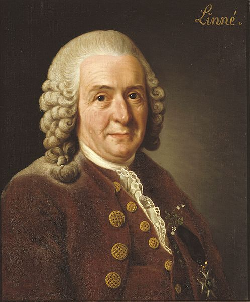 ‘Carl Linnaeus (23 May 1707 – 10 January 1778), also known after his ennoblement as ,Blunt (2004), p. 171. was a Swedish botanist, physician, and zoologist, who laid the foundations for the modern scheme of binomial nomenclature. He is known as the father of modern taxonomy, and is also considered one of the fathers of modern ecology. Many of his writings were in Latin, and his name is rendered in Latin as ‘ (after 1761 Carolus a Linné).

Linnaeus was born in the countryside of Småland, in southern Sweden. Linnaeus received most of his higher education at Uppsala University, and began giving lectures in botany there in 1730. He lived abroad between 1735 and 1738, where he studied and also published a first edition of his ‘ in the Netherlands. He then returned to Sweden, where he became professor of medicine and botany at Uppsala. In the 1740s, he was sent on several journeys through Sweden to find and classify plants and animals. In the 1750s and 60s, he continued to collect and classify animals, plants, and minerals, and published several volumes. At the time of his death, he was one of the most acclaimed scientists in Europe.

The Swiss philosopher Jean-Jacques Rousseau sent him the message: "Tell him I know no greater man on earth." The German writer Johann Wolfgang von Goethe wrote: "With the exception of Shakespeare and Spinoza, I know no one among the no longer living who has influenced me more strongly." Swedish author August Strindberg wrote: "Linnaeus was in reality a poet who happened to become a naturalist". Among other compliments, Linnaeus has been called ‘ (Prince of Botanists), "The Pliny of the North," and "The Second Adam".Broberg (2006), p. 7.

In botany, the author abbreviation used to indicate Linnaeus as the authority for species’ names is L. In older publications sometimes the abbreviation "Linn." is found (for instance in: Cheeseman, T.F. (1906) – Manual of the New Zealand Flora. Linnaeus’ remains comprise the type specimen for the species Homo sapiens, following the International Code of Zoological Nomenclature, since the sole specimen he is known to have examined when writing the species description was himself. ICZN Chapter 16, Article 72.4.1.1 – "For a nominal species or subspecies established before 2000, any evidence, published or unpublished, may be taken into account to determine what specimens constitute the type series." and Article 73.1.2 – "If the nominal species-group taxon is based on a single specimen, either so stated or implied in the original publication, that specimen is the holotype fixed by monotypy (see Recommendation 73F). If the taxon was established before 2000 evidence derived from outside the work itself may be taken into account [Art. 72.4.1.1] to help identify the specimen."

The establishment of universally accepted conventions for the naming of organisms was Linnaeus’ main contribution to taxonomy—his work marks the starting point of consistent use of binomial nomenclature.Reveal & Pringle (1993), p. 160-161. During the 18th century expansion of natural history knowledge, Linnaeus also developed what became known as the Linnaean taxonomy; the system of scientific classification now widely used in the biological sciences.

The Linnaean system classified nature within a nested hierarchy, starting with three kingdoms. Kingdoms were divided into classes and they, in turn, into orders, and thence into genera (singular: genus), which were divided into Species (singular: species).Simpson (1961), p. 16-19. Below the rank of species he sometimes recognized taxa of a lower (unnamed) rank; these have since acquired standardised names such as variety in botany and subspecies in zoology. Modern taxonomy includes a rank of family between order and genus that was not present in Linnaeus’ original system.Davis & Heywood (1973), p. 17.

Linnaeus’ groupings were based upon shared physical characteristics, and not simply upon differences. Of his higher groupings, only those for animals are still in use, and the groupings themselves have been significantly changed since their conception, as have the principles behind them. Nevertheless, Linnaeus is credited with establishing the idea of a hierarchical structure of classification which is based upon observable characteristics and intended to reflect natural relationships.Simpson (1961), p. 56-57. While the underlying details concerning what are considered to be scientifically valid "observable characteristics" have changed with expanding knowledge (for example, DNA sequencing, unavailable in Linnaeus’ time, has proven to be a tool of considerable utility for classifying living organisms and establishing their evolutionary relationships), the fundamental principle remains sound.