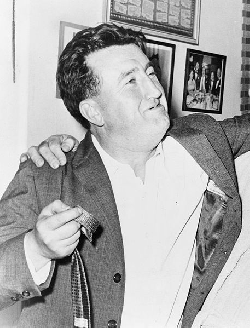 Brendan Francis Behan ( ; 9 February 1923 – 20 March 1964) was an Irish poet, short story writer, novelist, and playwright who wrote in both English and Irish. He was also an Irish republican and a volunteer in the Irish Republican Army. Born in Dublin into a republican family, he became a member of the IRA’s youth organisation Fianna Éireann at the age of fourteen. However, there was also a strong emphasis on Irish history and culture in the home, which meant he was steeped in literature and patriotic ballads from a tender age. Behan eventually joined the IRA at sixteen, which led to him serving time in a borstal youth prison in the United Kingdom and was also imprisoned in Ireland. During this time, he took it upon himself to study and he became a fluent speaker of the Irish language. Subsequently released from prison as part of a general amnesty given by the Fianna Fáil government in 1946, Behan moved between homes in Dublin, Kerry and Connemara and also resided in Paris for a period.

In 1954, Behan’s first play The Quare Fellow was produced in Dublin. It was well received; however, it was the 1956 production at Joan Littlewood’s Theatre Workshop in Stratford, London, that gained Behan a wider reputation – this was helped by a famous drunken interview on BBC television. In 1958, Behan’s play in the Irish language An Giall had its debut at Dublin’s Damer Theatre. Later, The Hostage, Behan’s English-language adaptation of An Giall, met with great success internationally. Behan’s autobiographical novel, Borstal Boy, was published the same year and became a worldwide bestseller.

He married Beatrice Ffrench-Salkeld in 1955. Behan was known for his drink problem, which resulted in him suffering from diabetes, which ultimately resulted in his death on 20 March 1964. He was given an IRA guard of honour which escorted his coffin and it was described by several newspapers as the biggest funeral since those of Michael Collins and Charles Stewart Parnell.

Behan is frequently mentioned in works of popular culture. His work has been a significant influence in the writings of Shane MacGowan, and he is the subject of "Streams Of Whiskey", a song by The Pogues. Behan is also mentioned in The Pogues’s song "Thousands Are Sailing" (written by Philip Chevron), with reference to the experience of Irish immigrants in New York. The quote "Compliments pass when the quality meet", taken from Behan’s book Borstal Boy, is used in The Pogues’s song "Sea Shanty" (written by Shane MacGowan).