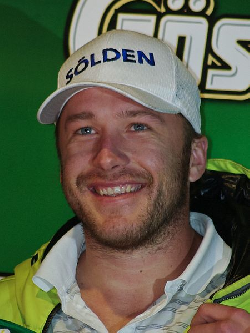 Samuel Bode Miller ( born October 12, 1977) is an American World Cup alpine ski racer with the U.S. Ski Team. He is an Olympic and World Championship gold medalist, a two-time overall World Cup champion in 2005 and 2008, and can therefore be considered the most successful male American alpine ski racer of all time (with only Lindsey Vonn surpassing him). Miller is also considered one of the greatest World Cup racers of all time with 33 victories, and is one of five men in history to win World Cup events in all five disciplines.

In November 2004, Miller became the fifth and so far last man to win World Cup races in all five disciplines: slalom, giant slalom, Super-G, downhill, and combined − and today he is the only one with five or more victories in each discipline.

In 2008, Miller and Lindsey Vonn won the overall World Cup titles for the first U.S. sweep in 25 years.

He has won five medals in the Winter Olympics, the most of any U.S. skier − two silvers (giant slalom and combined) in Salt Lake City 2002, and a gold (super combined), a silver (Super G) and a bronze (downhill) in Vancouver 2010. Miller is one of five skiers who have won Olympic medals in four different disciplines, matching the feats of Kjetil André Aamodt and female racers Anja Pärson, Janica Kostelić, and Katja Seizinger.

He has also won six discipline World Cups. On May 12, 2007, Miller left the U.S. Ski Team and raced independently for his personally-financed "Team America" for two seasons. Miller departed the 2009 season before its completion and rejoined the U.S. Ski Team in October 2009.

Miller not only first appeared in the World Cup during the 1998 season but also represented the United States in the 1998 Nagano Olympics, competing in both of the technical disciplines (giant slalom and slalom). In 1999, he also competed in Super G (which is considered a speed discipline, not a technical one) and represented the U.S. in all three events at the World Ski Championships at Beaver Creek, with a best finish of 8th in slalom. He finally achieved a podium in a giant slalom at Val d’Isère on December 17, 2000 (placing third), but then only competed in Super-G at the 2001 World Ski Championships; he crashed during the downhill portion of the combined and tore knee ligaments, which ended his competition.

During this season, Miller began regularly competing in downhill, making him a five-event skier on the World Cup circuit, although he was still considered a technical specialist. Miller won his first World Cup ski race on December 29, 2001, taking the giant slalom at Val d’Isère, and then followed it up the next day with another win in the slalom at Madonna di Campiglio. He would go on to win two more slalom races in January 2002, along with a pair of silver medals at the 2002 Winter Olympics in February, thus and established himself as the top racer on the U.S. Ski Team. This was his final season on Fischer skis, he switched to Rossignol following the season’s completion.

Miller challenged for the 2003 World Cup overall title but fell just short, finishing second to Stephan Eberharter of Austria. At the 2003 World Championships in St. Moritz, Switzerland, Miller won three medals: gold in giant slalom and combined, and silver in Super-G. He also won two other giant slaloms during the season.

In the 2004 season Miller won World Cup titles in two disciplines: giant slalom and combined, but placed 4th in the competition for the overall title. He won six World Cup races: three giant slaloms, two combineds and one slalom. After the season, Miller switched to Atomic skis.

Miller made history early in the season by winning at least one race in each of the four standard World Cup disciplines: slalom, giant slalom, super-G and downhill; by winning a slalom in Sestriere, Italy, on December 13, 2004, he joined Marc Girardelli of Luxembourg, who had been the first man to accomplish this feat in 1989. Miller accomplished the feat in less time than any previous skier, male or female; the victory was his sixth of the season after only ten races. At the 2005 World Championships in Bormio, Italy, he won two gold medals, in super-G and downhill. In the Bormio downhill portion of the combined, he lost a ski 16 seconds into the race, but decided to continue down the course nevertheless at speeds up to 83&nbsp;km/h on one ski, before sliding out near the bottom nearly two minutes later.