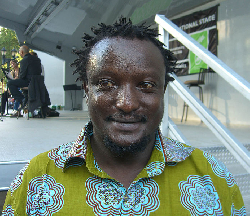 Binyavanga Wainaina (born 18 January 1971) is a Kenyan author, journalist and winner of the Caine Prize for African Writing.

Binyavanga Wainaina was born in Nakuru in Rift Valley province. He attended Moi Primary School in Nakuru, Mangu High School in Thika, and Lenana School in Nairobi. He later studied commerce at the University of Transkei in South Africa.

His debut book, a memoir entitled One Day I Will Write About This Place, was published in 2011.

Following his education, Wainaina worked in Cape Town for some years as a freelance food and travel writer.

In July 2002 he won the Caine Prize for his short story "Discovering Home". He is the founding editor of Kwani?, the first literary magazine in East Africa since Transition Magazine. Since its founding, Kwani? has since become an important source of new writing from Africa; several writers for the magazine have been nominated for the Caine Prize and have subsequently won it.

Wainaina’s satirical essay "How to Write About Africa" attracted wide attention. In 2003, he was given an award by the Kenya Publisher’s Association, in recognition of his services to Kenyan literature. He has written for The EastAfrican, National Geographic, The Sunday Times (South Africa), Granta, the New York Times, Chimurenga magazine and The Guardian (UK).

In 2007, Wainaina was a writer in residence at Union College in Schenectady, NY (USA). In the fall of 2008, he was in residence at Williams College, where he was teaching, lecturing and working on a novel. He is currently a Bard Fellow and the director of the Chinua Achebe Center for African Literature and Languages at Bard College.

Wainaina has collected over 13,000 recipes from around Africa and is an expert on traditional and modern African cuisines., G21: The World’s Magazine."

In January 2007, Binyavanga Wainaina was nominated by the World Economic Forum as a "Young Global Leader" – an award given to people for "their potential to contribute to shaping the future of the world." He subsequently declined the award. In a letter to Klaus Schwab and Queen Rania of Jordan, he wrote:

"I assume that most, like me, are tempted to go anyway because we will get to be ‘validated’ and glow with the kind of self-congratulation that can only be bestowed by very globally visible and significant people, and we are also tempted to go and talk to spectacularly bright and accomplished people – our ‘peers’. We will achieve Global Institutional Credibility for our work, as we have been anointed by an institution that many countries and presidents bow down to.

“The problem here is that I am a writer. And although, like many, I go to sleep at night fantasizing about fame, fortune and credibility, the thing that is most valuable in my trade is to try, all the time, to keep myself loose, independent and creative…it would be an act of great fraudulence for me to accept the trite idea that I am ‘going to significantly impact world affairs’."Visiting writer Wainaina winning worldwide accolades, The Chronicle, January 31. 2007