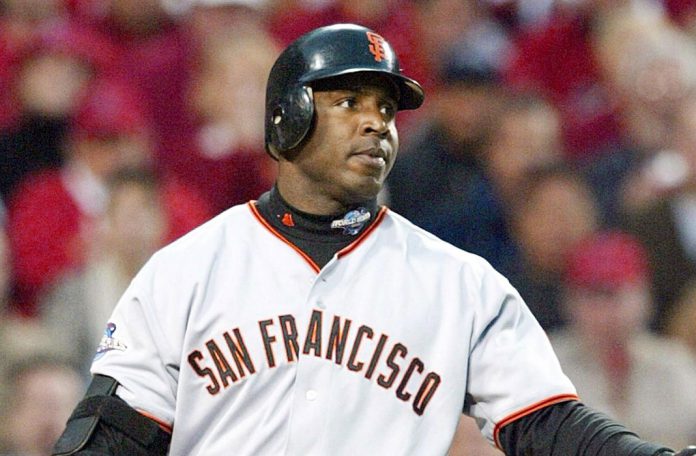 Barry Lamar Bonds (born July 24, 1964) is an American former Major League Baseball left fielder. Bonds played from 1986 to 2007, for the Pittsburgh Pirates and San Francisco Giants. He is the son of former major league All-Star Bobby Bonds. He debuted in the Major Leagues with the Pittsburgh Pirates in 1986 and joined the San Francisco Giants in 1993, where he stayed through 2007.

Bonds is considered to be one of the greatest baseball players of all-time. He has a record-setting seven Most Valuable Player awards, including a record-setting four consecutive MVPs. He is a 14-time All-Star and 8-time Gold Glove-winner. He holds numerous Major League Baseball records, including the all-time Major League Baseball home run record with 762 and the single-season Major League record for home runs with 73 (set in ), and is also the all-time career leader in both walks (2,558) and intentional walks (688).

Bonds has led a controversial career, notably as a central figure in baseball’s steroids scandal. In 2007, he was indicted on charges of perjury and obstruction of justice for allegedly lying to the grand jury during the government’s investigation of BALCO, by testifying that he never knowingly took any illegal steroids. The trial began March 21, 2011; he was convicted on April 13, 2011, on the obstruction of justice charge. On January 9, 2013 Bonds was denied entry into baseball’s Hall of Fame in Cooperstown during his first year of eligibility on the ballot.

Born in Riverside, California, Bonds grew up in San Carlos, California and attended Junípero Serra High School in San Mateo, California and excelled in baseball, basketball and football. As a freshman, he spent the baseball season on the JV team. The next three years—1980 to 1982—he starred on the varsity team. He batted for a .467&nbsp; batting average his senior year, and was honoured as a prep All-American. The Giants drafted Bonds in the second round of the 1982 MLB draft as a high school senior, but the Giants and Bonds were unable to agree on contract terms when Tom Haller’s maximum offer was $70,000 ($ today), and Bond’s minimum to go pro was $75,000, so Bonds instead decided to attend college.

Bonds attended Arizona State University, hitting .347 with 45&nbsp;home runs and 175&nbsp;runs batted in (RBI). In 1984 he batted .360 and had 30&nbsp;stolen bases. In 1985 he hit 23&nbsp;home runs with 66&nbsp;RBIs and a .368&nbsp;batting average. He was a Sporting News All-American selection that year. He tied the NCAA record with seven consecutive hits in the College World Series as a sophomore and was named to All-Time College World Series Team in 1996. He graduated from Arizona State in 1986 with a degree in criminology. He was named ASU On Deck Circle Most Valuable Player; other winners include Dustin Pedroia, Willie Bloomquist, Paul Lo Duca, and Ike Davis. During college, he played a part of one summer in the amateur Alaska Baseball League with the Alaska Goldpanners.