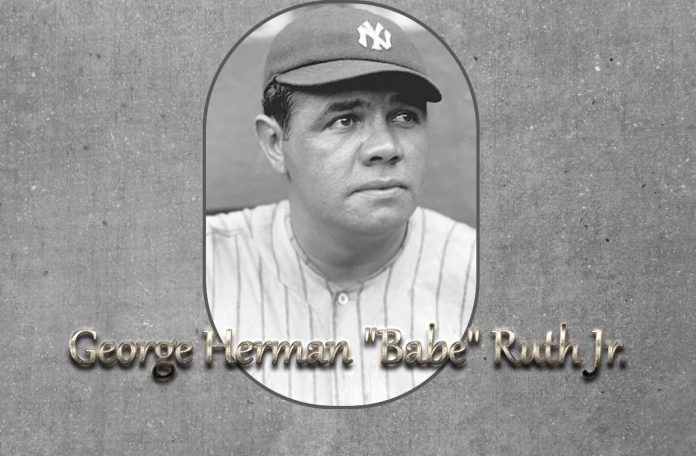 George Herman “Babe” Ruth, Jr. (February 6, 1895&nbsp;– August 16, 1948), nicknamed “the Bambino” and “the Sultan of Swat“, was an American baseball player who spent 22 seasons in Major League Baseball (MLB) playing for three teams (1914–1935). Known for his hitting brilliance, Ruth set career records in his time for home runs (714, since broken), slugging percentage (.690), runs batted in (RBI) (2,213, since broken), bases on balls (2,062, since broken), and on-base plus slugging (OPS) (1.164). Ruth originally entered the major leagues with the Boston Red Sox as a starting pitcher, but after he was sold to the New York Yankees in 1919, he converted to a full-time right fielder. He subsequently became one of the league’s most prolific hitters and with his home run hitting prowess, he helped the Yankees win seven pennants and four World Series titles. Ruth retired in 1935 after a short stint with the Boston Braves, and the following year, he became one of the first five players to be elected into the National Baseball Hall of Fame.

Ruth was the first player to hit 60&nbsp; home runs in one season (1927), a mark not surpassed until Roger Maris hit 61 in 1961. Ruth’s lifetime record of 714&nbsp; home runs stood until 1974 when it was surpassed by Hank Aaron. Unlike many power hitters, Ruth also hit for a high batting average: his .342 lifetime average is the tenth highest in baseball history, and in one season (1923) he batted .393, a Yankee record. Ruth dominated the era in which he played. He led the league in home runs during a season twelve times, slugging percentage and OPS thirteen times each, runs scored eight times, and RBIs six times. Each of those totals represents a modern record.

Ruth is credited with changing baseball itself. The popularity of the game exploded in the 1920s, largely due to his influence. Ruth ushered in the “live-ball era”, as his big swing led to escalating home run totals that not only excited fans, but helped baseball evolve from a low-scoring, speed-dominated game to a high-scoring power game. He has since become regarded as one of the greatest sports heroes in American culture. Ruth’s legendary power and charismatic personality made him a larger than life figure in the “Roaring Twenties”, and according to ESPN, he was the first true American sports celebrity superstar whose fame transcended baseball. Off the field, he was famous for his charity but also was noted for his often reckless lifestyle. He has been repeatedly voted onto teams made up of the sport’s greats and is considered by many the greatest baseball player of all time.

Ruth met Helen Woodford in a coffee shop in Boston, and they were married on October 17, 1914. Creamer, pp. 84, 100. They adopted a daughter, Dorothy, in 1921. Babe and Helen separated c. 1925 reportedly due to his repeated infidelities. Creamer, p. 281. Their last public appearance together came during the 1926 World Series. Creamer, p. 336. Helen died in a fire in Watertown, Massachusetts in 1929, in a house owned by Edward Kinder, a dentist with whom she had been living as “Mrs Kinder”. Kinder identified her body as being that of his wife, then went into hiding after Helen’s true identity was revealed; Ruth was forced to get authorities to issue a new death certificate in her legal name, Margaret Helen Woodford Ruth. Montville p. 282-286. In her book, My Dad, the Babe, Dorothy claimed that she was Ruth’s biological child by a girlfriend named Juanita Jennings. She died in 1989.

In 1928 Ruth married actress and model Claire Merritt Hodgson and adopted her daughter, Julia. Julia Ruth Stevens threw out the ceremonial first pitch before the final game in the original Yankee Stadium on September 21, 2008.

By one account, Julia and Dorothy were, through no fault of their own, the reason for the seven-year rift in Ruth’s relationship with teammate Lou Gehrig. Sometime in 1932 Gehrig’s mother, during a conversation which she assumed was private, remarked, “It’s a shame [Claire] doesn’t dress Dorothy as nicely as she dresses her own daughter.” When the comment inevitably got back to Ruth, he angrily told Gehrig to tell his mother to mind her own business. Gehrig, in turn, took offence at what he perceived as Ruth’s disrespectful treatment of his mother. The two men reportedly never spoke off the field from that moment until the famous “bear hug” in Yankee Stadium on Lou Gehrig Day in 1939. Creamer, p. 415.