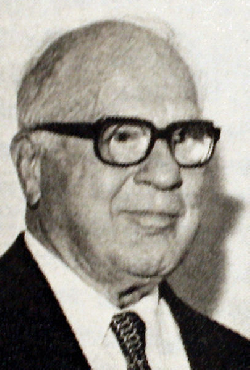 Avery Brundage ( September&nbsp;28, 1887&nbsp;– May&nbsp;8, 1975) was the fifth president of the International Olympic Committee (IOC), serving from 1952 to 1972. The only American to attain that position, Brundage is remembered as a zealous advocate of amateurism, and for his involvement with the 1936 and 1972 Summer Olympics, both held in Germany.

Brundage was born in Detroit in 1887 to a working-class family; when he was five years old, his father moved his family to Chicago and subsequently abandoned his wife and children. Raised mostly by relatives, he attended the University of Illinois to study engineering and became a track star. In 1912, he competed in the Summer Olympics, contesting the pentathlon and decathlon, but did not win any medals; both events were won by Jim Thorpe. He won national championships in track three times between 1914 and 1918, and founded his own construction business. He earned his wealth from this company and from investments, and never accepted pay for his sports involvement.

Following his retirement from athletics, Brundage became a sports administrator, rising rapidly through the ranks in United States sports groups. As leader of America’s Olympic organizations, he fought zealously against a boycott of the 1936 Summer Olympics, which had been awarded to Germany before the rise of its Nazi government and its subsequent, escalating persecution of Jews. Although Brundage was successful in getting a team to the Games in Berlin, its participation was controversial, and has remained so. Brundage was elected to the IOC that year, and quickly became a major figure in the Olympic movement. He was elected IOC president in 1952.

As president, Brundage fought strongly for amateurism and against commercialization of the Olympic Games, even as these stands came to be seen as incongruous with the realities of modern sports. His final Olympics as president, at Munich in 1972, was marked by controversy: at the memorial service following the murder of 11&nbsp;Israeli athletes by terrorists, Brundage decried the politicization of sports and, refusing to cancel the remainder of the Olympics, declared "the Games must go on". Although Brundage’s statement was applauded by those in attendance, his decision to continue the Games has since been harshly criticized, and his actions in 1936 and 1972 seen as evidence of anti-Semitism. In retirement, Brundage married a German princess; he died in 1975.

Brundage married Elizabeth Dunlap, daughter of a Chicago banker, in 1927, when he was 40. Elizabeth Brundage, three years younger than her husband, was a trained soprano, a talent she exhibited for visitors to the Brundage home. She had a strong interest in classical music, one which may not have been fully shared by her husband, who said of a performance of Wagner’s Die Walküre that it "started at 7&nbsp;o’clock, at 10:00&nbsp;pm I looked at my watch and it registered exactly 8&nbsp;o’clock". She died at age 81 in 1971.

Avery Brundage had no children with either of his wives. During his first marriage, however, Brundage fathered two sons out of wedlock with his Finnish mistress, Lilian Dresden. His affair with Dresden was one of many. The children were born in 1951 and 1952, at precisely the time that Brundage was being considered for the presidency of the IOC. Though he privately acknowledged paternity, Brundage took great pains to conceal the existence of these children, concerned that the truth about his extra-marital relationships might damage his chances of election: he requested that his name be kept off the birth certificates. Brundage visited his two sons periodically in the 1950s, visits that tailed off to telephone calls in the 1960s and nothing in his final years. He did establish a trust fund for the boys’ education and start in life, but after his death, unnamed in his will, they sued and won a small settlement.