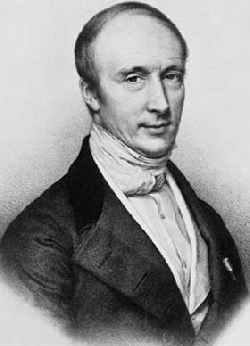 Baron Augustin-Louis Cauchy ( 21 August 1789 – 23 May 1857) was a French mathematician who was an early pioneer of analysis. He started the project of formulating and proving the theorems of infinitesimal calculus in a rigorous manner, rejecting the heuristic principle of the generality of algebra exploited by earlier authors. He defined continuity in terms of infinitesimals and gave several important theorems in complex analysis and initiated the study of permutation groups in abstract algebra. A profound mathematician, Cauchy exercised a great influence over his contemporaries and successors. His writings cover the entire range of mathematics and mathematical physics.

"More concepts and theorems have been named for Cauchy than for any other mathematician (in elasticity alone there are sixteen concepts and theorems named for Cauchy)." Cauchy was a prolific writer; he wrote approximately eight hundred research articles and five complete textbooks. He was a devout Roman Catholic, strict Bourbon royalist, and a close associate of the Jesuit order.

Cauchy married Aloise de Bure in 1818. She was a close relative of the publisher who published most of Cauchy’s works. By her he had two daughters, Marie Françoise Alicia (1819) and Marie Mathilde (1823).

Cauchy’s father (Louis François Cauchy) was a high official in the Parisian Police of the New Régime. He lost his position because of the French Revolution (July 14, 1789) that broke out one month before Augustin-Louis was born.His father’s dismissal is sometimes seen as the cause of the deep hatred of the French Revolution that Cauchy felt all through his life. The Cauchy family survived the revolution and the following Reign of Terror (1794) by escaping to Arcueil, where Cauchy received his first education, from his father. After the execution of Robespierre (1794), it was safe for the family to return to Paris. There Louis-François Cauchy found himself a new bureaucratic job, and quickly moved up the ranks. When Napoleon Bonaparte came to power (1799), Louis-François Cauchy was further promoted, and became Secretary-General of the Senate, working directly under Laplace (who is now better known for his work on mathematical physics). The famous mathematician Lagrange was also no stranger in the Cauchy family.

On Lagrange’s advice, Augustin-Louis was enrolled in the École Centrale du Panthéon, the best secondary school of Paris at that time, in the fall of 1802. Most of the curriculum consisted of classical languages; the young and ambitious Cauchy, being a brilliant student, won many prizes in Latin and Humanities. In spite of these successes, Augustin-Louis chose an engineering career, and prepared himself for the entrance examination to the École Polytechnique.

In 1805 he placed second out of 293 applicants on this exam, and he was admitted. One of the main purposes of this school was to give future civil and military engineers a high-level scientific and mathematical education. The school functioned under military discipline, which caused the young and pious Cauchy some problems in adapting. Nevertheless, he finished the Polytechnique in 1807, at the age of 18, and went on to the École des Ponts et Chaussées (School for Bridges and Roads). He graduated in civil engineering, with the highest honors.

After finishing school in 1810, Cauchy accepted a job as a junior engineer in Cherbourg, where Napoleon intended to build a naval base. Here Augustin-Louis stayed for three years, and although he had an extremely busy managerial job, he still found time to prepare three mathematical manuscripts, which he submitted to the Première Classe (First Class) of the Institut de France.In the revolutionary years the French Académie des Sciences was known as the "First Class" of the Institut de France. Cauchy’s first two manuscripts (on polyhedra) were accepted; the third one (on directrices of conic sections) was rejected.