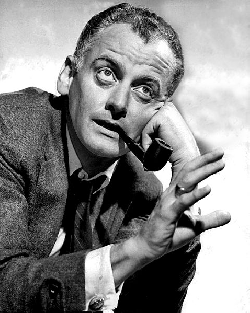 Arthur William Matthew “Art” Carney (November 4, 1918 – November 9, 2003) was an American actor in film, stage, television and radio. He is best known for playing Ed Norton, opposite Jackie Gleason’s Ralph Kramden in the situation comedy The Honeymooners, and for winning the Academy Award for Best Actor for his role in Harry and Tonto.

Carney was married three times to two women: Jean Myers, from 1940 to 1965, and again from 1980 until his death in 2003, and to Barbara Isaac from December 21, 1966 until 1977. He had three children with his first wife, Brian (born 1946), Eileen (born 1946) and Paul (born 1952). Brian Carney appears as a GEICO executive alongside the animated gecko in GEICO commercials. His great-nephew is musician/actor Reeve Carney. Carney died in his sleep on November 9, 2003 at age 85 of natural causes near his home in Westbrook, Connecticut. He is interred at Riverside Cemetery in Old Saybrook, Connecticut. Jean Carney died nine years later on October 31, 2012 at the age of 93.

Carney was a comic singer with the Horace Heidt orchestra, which was heard often on radio during the 1930s, notably on the hugely successful Pot o’ Gold, the first big-money giveaway show in 1939–41. Carney’s film career began with an uncredited role in Pot o’ Gold (1941), the radio program’s spin-off feature film, playing a member of Heidt’s band. Carney, a gifted mimic, worked steadily in radio during the 1940s, playing character roles and impersonating celebrities. In 1941 he was the house comic on the big band remote series, Matinee at Meadowbrook.

One of his radio roles during the 1940s was the fish Red Lantern on Land of the Lost. In 1943 he played Billy Oldham on Joe and Ethel Turp, based on Damon Runyon stories. He appeared on The Henry Morgan Show in 1946–47. He impersonated FDR on The March of Time and Dwight D. Eisenhower on Living 1948. In 1950–51 he played Montague’s father on The Magnificent Montague. He was a supporting player on Casey, Crime Photographer and Gang Busters.

On the radio and television shows of The Morey Amsterdam Show from 1948 to 1950, Carney’s character Charlie the doorman became known for his catchphrase, "Ya know what I mean?".

In 1950, Jackie Gleason was starring in a New York–based comedy-variety series, Cavalcade of Stars, and played many different characters. Gleason’s regular characters included Charlie Bratten, a lunchroom loudmouth who insisted on spoiling a neighboring patron’s meal. Carney, established in New York as a reliable actor, played Bratten’s mild-mannered victim, Clem Finch. Gleason and Carney developed a good working chemistry, and Gleason recruited Carney to appear in other sketches, including the domestic-comedy skits featuring The Honeymooners. Carney gained lifelong fame for his portrayal of sewer worker Ed Norton, opposite Jackie Gleason’s Ralph Kramden. The success of these skits resulted in the famous filmed situation comedy The Honeymooners, and the Honeymooners revivals that followed. He was nominated for seven Emmy Awards and won six.