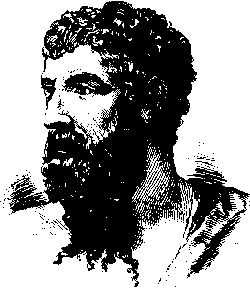 Aristophanes ( or ;Jones, Daniel; Roach, Peter, James Hartman and Jane Setter, eds. Cambridge English Pronouncing Dictionary. 17th edition. Cambridge UP, 2006. ; , c. 446 BC&nbsp;– c. 386 BC), son of Philippus, of the deme Cydathenaus,Aristophanes: Lysistrata, The Acharnians, The Clouds Alan Sommerstein, Penguin Books 1973, page 9 was a comic playwright of ancient Athens. Eleven of his 40 plays survive virtually complete. These, together with fragments of some of his other plays, provide the only real examples of a genre of comic drama known as Old Comedy, and they are used to define the genre.Aristophanes: Clouds K.J.Dover (ed), Oxford University Press 1970, Intro. page X. Also known as the Father of ComedyAristophanes in Performance 421 BC-AD 2007:Peace, Birds and Frogs Edith Hall and Amanda Wrigley, Legenda (Oxford) 2007, page 1 and the Prince of Ancient Comedy, Aristophanes has been said to recreate the life of ancient Athens more convincingly than any other author.Barrett (2003) page 26 His powers of ridicule were feared and acknowledged by influential contemporaries; PlatoThe Apology translated by Benjamin Jowett, section 4Apology, Greek text, edited J. Burnet, singled out Aristophanes’ play The Clouds as slander contributing to the trial and execution of Socrates although other satirical playwrightsLysistrata, The Acharnians, The Clouds Alan Sommerstein, Penguin Books 1973, p16 had also caricatured the philosopher. His second play, The Babylonians (now lost), was denounced by the demagogue Cleon as a slander against the Athenian polis. It is possible that the case was argued in court but details of the trial are not recorded and Aristophanes caricatured Cleon mercilessly in his subsequent plays, especially The Knights, the first of many plays that he directed himself. "In my opinion," he says through the Chorus in that play, "the author-director of comedies has the hardest job of all." ()Aristophanis Comoediae Tomus 1, F.W.Hall and W.M.Geldart (eds), Oxford Classical Texts, Knights ln 516

Less is known about Aristophanes than about his plays. In fact, his plays are the main source of information about him. It was conventional in Old Comedy for the Chorus to speak on behalf of the author during an address called the ‘parabasis’ and thus some biographical facts can be got ‘straight from the horse’s mouth’, so to speak. However, these facts relate almost entirely to his career as a dramatist and the plays contain few clear and unambiguous clues about his personal beliefs or his private life.Greek Comedy and Ideology David Konstan, Oxford University Press US 1995, page 6 He was a comic poet in an age when it was conventional for a poet to assume the role of ‘teacher’ (didaskalos), and though this specifically referred to his training of the Chorus in rehearsal, it also covered his relationship with the audience as a commentator on significant issues.Aristophanes: The Clouds K.J.Dover, Oxford University Press 1970, Intro. page XIV Aristophanes claimed to be writing for a clever and discerning audience,Aristophanis Comoediae Tomus 1, F.W.Hall and W.M.Geldart (eds), Oxford Classical Texts,Clouds 520-25 yet he also declared that ‘other times’ would judge the audience according to its reception of his plays.Aristophanis Comoediae Tomus 1, F.W.Hall and W.M.Geldart (eds), Oxford Classical Texts,Clouds 560-62 He sometimes boasts of his originality as a dramatistWasps 1536-7 , Clouds 545-48, Peace 739-58 yet his plays consistently espouse opposition to radical new influences in Athenian society. He caricatured leading figures in the arts (notably Euripides, whose influence on his own work however he once begrudgingly acknowledged),Barrett (2003) p.9 in politics (especially the populist Cleon), and in philosophy/religion (where Socrates was the most obvious target). Such caricatures seem to imply that Aristophanes was an old-fashioned conservative, yet that view of him leads to contradictions.Greek Society Antony Andrewes, Pelican Books, 1981, pages 247-48