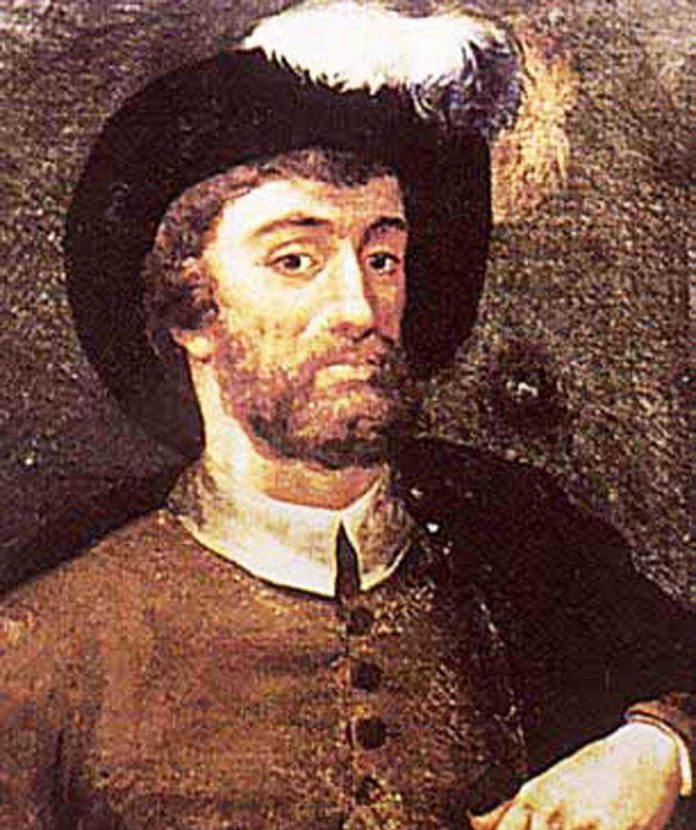 Antonio Pigafetta ( c. 1491 – c. 1531) was an Italian scholar and explorer from the Republic of Venice. He traveled with the Portuguese explorer Ferdinand Magellan and his crew by order of the King Charles I of Spain on their voyage to the Indies. During the expedition, he served as Magellan’s assistant and kept an accurate journal which later assisted him in translating one of the Philippine languages, Cebuano. It is the first recorded document concerning this language.

Pigafetta was one of the 18 men who returned to Spain in 1522, out of the approximately 240 who set out three years earlier. The voyage completed the first circumnavigation of the world; Juan Sebastián Elcano served as captain after Magellan’s death. Pigafetta’s journal is the source for much of what we know about Magellan and Elcano’s voyage.

At least one warship of the Italian Navy, a destroyer of the Navigatori class, was named after him in 1931.

Pigafetta was wounded on Mactan in the Philippines, where Magellan was killed. Nevertheless, he recovered and was among the 18 who accompanied Juan Sebastián Elcano on board the Victoria, on the return voyage to Spain.

Upon reaching port in Sanlúcar de Barrameda (Province of Cadiz) in September 1522, three years after his departure, Pigafetta returned to the Republic of Venice. He related his experiences in Relazione del primo viaggio intorno al mondo (Report on the First Voyage Around the World), which was composed in Italian. Although parts were published in Paris in 1525, the manuscript was not published in its entirety until the late eighteenth century. The original document was not preserved.

It was not through Antonio Pigafetta’s writings that Europeans first learned of the circumnavigation of the globe. Rather, it was through an account written by Maximilianus Transylvanus, which was published in 1523. Transylvanus had been instructed to interview some of the survivors of the voyage when Magellan’s surviving ship Victoria returned to Spain in September 1522. After Magellan’s voyage, Pigafetta utilized the connections he had made prior to the voyage with the Knights of Rhodes to achieve membership in the order.

In Seville, Antonio Pigafetta heard of Magellan’s planned expedition and elected to embark, accepting the title of sobrasaliente (supernumerary) and a modest salary of 1,000 maravedís. During the trip, Pigafetta collected extensive data concerning the geography, climate, flora, fauna and the inhabitants of the places that the expedition visited. His meticulous notes were invaluable to future explorers and cartographers, mainly due to his inclusion of nautical and linguistic data, and to latter-day historians because of its vivid, detailed style. The only other sailor to maintain a journal during the voyage was Francisco Albo, last Victoria’s pilot, who kept a formal logbook.

Pigafetta belonged to a rich family of Vicenza. In his youth he studied astronomy, geography and cartography. He served on board the ships of the Knights of Rhodes at the beginning of the 16th century. Until 1519, he accompanied the papal nuncio, Monsignor Chieregati, to Spain.