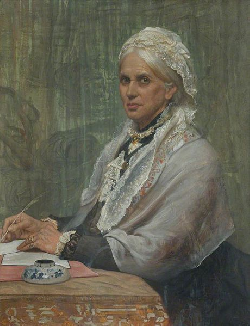 Anne Jemima Clough (20 January 1820 &ndash; 27 February 1892) was an early English suffragist and a promoter of higher education for women.

Clough was born at Liverpool, the daughter of a cotton merchant. She was the sister of Arthur Hugh Clough, the poet and assistant to Florence Nightingale. When two years old she was taken with the rest of the family to Charleston, South Carolina. It was not till 1836 that she returned to England, and though her ambition was to write, she was occupied for the most part in teaching.

Her father’s failure in business led her to open a school in 1841. This was carried on until 1846. In 1852, after making some technical studies in London and working at the Borough Road and the Home and Colonial schools, she opened another small school of her own at Ambleside in Westmorland. Giving this up some ten years later, she lived for a time with the widow of her brother Arthur Hugh Clough&mdash;who had died in 1861 &mdash; in order that she might educate his children. (The youngest daughter, Blanche Athena, subsequently devoted her life to helping her aunt.) Keenly interested in the education of women, she made friends with Emily Davies, Barbara Bodichon, Frances Buss and others. After helping to found the North of England council for promoting the higher education of women, she acted as its secretary from 1867 to 1870 and as its president from 1873 to 1874.

It led to the organisation of local lectures by the universities. The higher local examinations for women had been started in 1869, and in 1870 Henry Sidgwick suggested that lectures should be given in Cambridge to assist the candidates. The plan was most successful, women coming long distances to attend the lectures. It was therefore determined to open a house of residence in Cambridge University to accommodate the students, and Miss Clough was asked to be its head. She began work at a house in Regent Street, Cambridge, in October 1871 with five students, and out of that beginning was evolved Newnham College. In 1872 Miss Clough removed to the more convenient premises known as Merton Hall, but the number of students so increased that in 1874 a new house again became imperative. It was decided to build one; a sum of £10,000. was subscribed by friends of women’s education. Newnham Hall, the old hall of the present Newnham College, was opened in 1875. More room was, however, soon needed, and Newnham College was established on its present basis, under the principalship of Miss Clough, in 1880. As the college developed Miss Clough acquired the position of a recognised leader in the education of women, and many things now regarded as a matter of course are due to her initiative. Clough’s personal charm and high aims, together with the development of the college under her care, led her to be regarded as one of the foremost leaders of the women’s educational movement.

She died at Cambridge on 27 February 1892. Two portraits of Clough are at Newnham College, one by Sir William Blake Richmond, the other by James Jebusa Shannon.