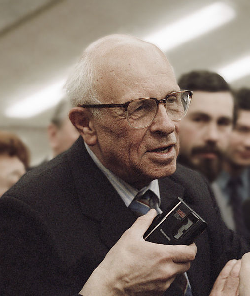 He became renowned as the designer of the Soviet Union’s Third Idea, a codename for Soviet development of thermonuclear weapons. Sakharov was an advocate of civil liberties and civil reforms in the Soviet Union. He was awarded the Nobel Peace Prize in 1975. The Sakharov Prize, which is awarded annually by the European Parliament for people and organizations dedicated to human rights and freedoms, is named in his honor.

Sakharov was born in Moscow on May 21, 1921. His father was Dmitri Ivanovich Sakharov, a private school physics teacher and an amateur pianist. His father later taught at the Second Moscow State University.Sidney David Drell, Sergeǐ Petrovich Kapitsa, Sakharov Remembered: a tribute by friends and colleagues (1991), p. 4 Dmitri’s grandfather Ivan had been a prominent lawyer in Russia who had displayed respect for social awareness and humanitarian principles (including advocating the abolition of capital punishment) that would later influence his grandson. Sakharov’s mother was Yekaterina Alekseyevna Sakharova (née Sofianos and of Greek ancestry). His parents and his paternal grandmother, Maria Petrovna, largely shaped Sakharov’s personality. Although his paternal great-grandfather had been a priest in the Russian Orthodox Church, and his pious mother did have him baptised, he was an atheist in later life. However, he did believe that a non-scientific "guiding principle" governed the universe and human life.Drell, Sidney D., and Sergei P. Kapitsa (eds.), Sakharov Remembered, pp. 3, 92. New York: Springer, 1991.

Sakharov entered Moscow State University in 1938. Following evacuation in 1941 during the Great Patriotic War (World War II), he graduated in Aşgabat, in today’s Turkmenistan. He was then assigned laboratory work in Ulyanovsk. During this period, in 1943, he married Klavdia Alekseyevna Vikhireva, with whom he raised two daughters and a son before she died in 1969. He returned to Moscow in 1945 to study at the Theoretical Department of FIAN (the Physical Institute of the Soviet Academy of Sciences). He received his Ph.D. in 1947.

After the end of World War II, Sakharov researched cosmic rays. In mid-1948 he participated in the Soviet atomic bomb project under Igor Kurchatov and Igor Tamm. The first Soviet atomic device was tested on August 29, 1949. After moving to Sarov in 1950, Sakharov played a key role in the development of the first megaton-range Soviet hydrogen bomb using a design known as "Sakharov’s Third Idea" in Russia and the Teller-Ulam design in the United States. It was first tested as RDS-37 in 1955. A larger variation of the same design which Sakharov worked on was the 50MT Tsar Bomba of October 1961, which was the most powerful nuclear device ever exploded.

Sakharov saw "striking parallels" between his fate and those of J. Robert Oppenheimer and Edward Teller in the USA. Sakharov believed that in this "tragic confrontation of two outstanding people," both deserved respect, because "each of them was certain he had right on his side and was morally obligated to go to the end in the name of truth." While Sakharov strongly disagreed with Teller over nuclear testing in the atmosphere and Strategic Defense Initiative, he believed that American academics had been unfair to Teller’s resolve to get the H-bomb for the United States since "all steps by the Americans of a temporary or permanent rejection of developing thermonuclear weapons would have been seen either as a clever feint, or as the manifestation of stupidity. In both cases, the reaction would have been the same – avoid the trap and immediately take advantage of the enemy’s stupidity."

Sakharov never felt that by creating nuclear weapons he had "known sin," in Oppenheimer’s expression. He later wrote: "After more than forty years, we have had no third world war, and the balance of nuclear terror … may have helped to prevent one. But I am not at all sure of this; back then, in those long-gone years, the question didn’t even arise. What most troubles me now is the instability of the balance, the extreme peril of the current situation, the appalling waste of the arms race … Each of us has a responsibility to think about this in global terms, with tolerance, trust, and candor, free from ideological dogmatism, parochial interests, or national egotism."