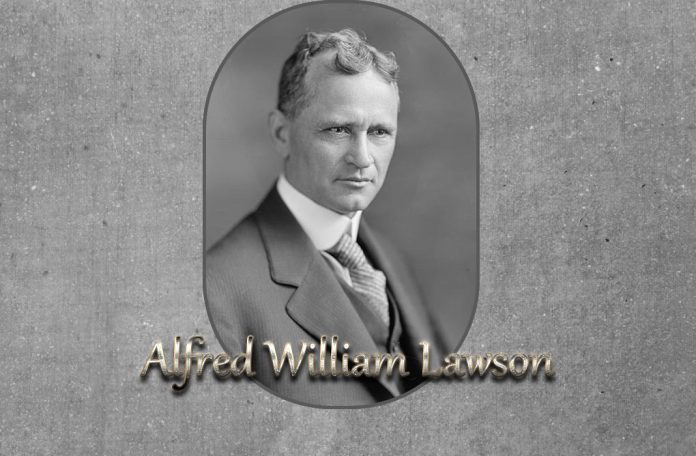 Alfred William Lawson (March 24, 1869 – November 29, 1954) was a professional baseball player, manager and league promoter from 1887 through 1916 and went on to play a pioneering role in the US aircraft industry, publishing two early aviation trade journals. In 1904, he also wrote a novel, Born Again, clearly inspired by the popular Utopian fantasy Looking Backward by Edward Bellamy, an early harbinger of the metaphysical turn his career would take with the theory of Lawsonomy. He is frequently cited as the inventor of the airliner and was awarded several of the first air mail contracts, which he ultimately could not fulfil. He founded the Lawson Aircraft Company in Green Bay, Wisconsin, to build military training aircraft and later the Lawson Airplane Company in Milwaukee, Wisconsin, to build airliners. The crash of his ambitious Lawson L-4 “Midnight Liner” during its trial flight takeoff on May 8, 1921, ended his best chance for commercial aviation success. An early advocate or rather evangelist of aviation, in October 1908 Mr Lawson started the magazine “Fly” to stimulate public interest and educate readers in the fundamentals of the new science of aviation. It sold for 10 cents a copy from newsstands across the country. In 1910, moving to New York City, he renamed the magazine “Aircraft” and published it until 1914. The magazine chronicled the technical developments of the early aviation pioneers. He was the first advocate for commercial air travel, coining the term “airline.” He also advocated for strong American flying force, lobbying Congress in 1913 to expand its appropriations for Army aircraft.

In early 1913, he learned to fly the Sloan-Deperdussin and the Moisant-Bleriot monoplanes becoming an accomplished pilot. Later that year he bought a Thomas flying boat and he became the first air commuter regularly flying from his country house in Seidler’s Beach NJ to the foot of 75th Street NYC (about 35 miles). In 1917, utilizing the knowledge gained from 10 years advocating aviation, he built his first airplane, Lawson Military Tractor 1 (MT-1) trainer and founded the Lawson Aircraft Corporation. The company’s plant was sited at Green Bay WI. There he secured a contract and built the Lawson MT-2. He also designed the steel fuselage Lawson Armored Battler, that never got beyond the drafting board given doubts within the Army aviation community and the signing of the armistice.

Lawson C.2 or T-2After the war, 1919, Mr Lawson started a project to build America’s first airline. He secured financial backing and in 5 months he had built and demonstrated in flight his biplane airliner, the 18 passenger Lawson L-2. He demonstrated its capabilities in a 2000-mile multi-city tour from Milwaukee to Chicago-Toledo-Cleveland-Buffalo-Syracuse-New york City-Washington DC-Collinsville-Dayton-Chicago back to Milwaukee, creating a buzz of positive press. The publicity allowed him to secure an additional $1 million to build the 26-passenger Midnight Liner. In late 1920, he secured Government contracts for three airmail routes and to deliver 10 warplanes, but due to the Fall 1920 recession, he could not secure the necessary $100,000 in cash reserve called for in the contracts and he had to decline the contracts. In 1926 he started his last airliner, the 56 seats, two tiers Lawson super airliner. The aircraft crashed on takeoff on its maiden flight.

In this phase of his life, he was considered as one of the leading thinkers in the budding commercial American aviation community, but his troubles with getting financial backing for his ideas led him to turn to Economics, Philosophy, and Organization.

In the 1920s, he promoted health practices including vegetarianism and claimed to have found the secret of living to 200. He also developed his own highly unusual theories of physics, according to which such concepts as “penetrability”, “suction and pressure” and “zig-zag-and-swirl” were discoveries on par with Einstein’s Theory of Relativity. He published numerous books on these concepts, all set in a distinctive typography. Lawson repeatedly predicted the worldwide adoption of Lawsonian principles by the year 2000.