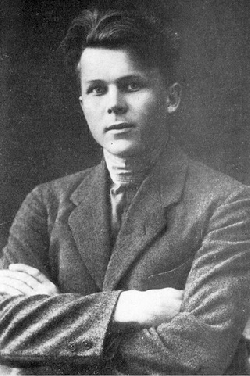 Tvardovsky’s most popular poem, Vasili Tyorkin ( also known as A Book About a Soldier, "Книга про бойца") (1941–1945), is about an ordinary soldier in the German-Soviet War. Filled with humor, the poem was a hymn of optimism and resourcefulness of the Russian soldier. It was surprisingly non-politicized, down-to-earth, and intentionally devoid of any picturesque heroism. It was printed chapter by chapter and immediately sent to the front in newspapers and magazines as well as read over the radio by Dmitry Orlov.James Von Geldern and Richard Stites, Mass Culture in Soviet Russia: Tales, Poems, Songs, Movies, Plays, and Folklore, 1917-1953 (Indiana University Press, 1995: ISBN 0-253-32893-4), p. 371. Tvardovsky was awarded his second Stalin Prize for Vasili Tyorkin.

Tvardovsky’s World War II-themed poem "A House by the Road" was the basis for Valery Gavrilin’s 1984 symphonic suite of the same name.

A minor planet 3261 Tvardovskij discovered by Soviet astronomer Nikolai Stepanovich Chernykh in 1979 is named after him.

Tvardovsky was born into a Russian family in Zagorye, Smolensk Governorate. At the time of his birth, the family lived on a farm that his father had purchased in installments from The Peasant Land Bank. Tvardovsky’s father, the son of a landless soldier, was a blacksmith by trade. The farm was situated on poor land, but Tvardovsky’s father loved it and was proud of what he had acquired through years of hard labor. He transmitted this love and pride to Aleksandr. Tvardovsky’s father later perished as a kulak during the period of collectivization in the Soviet Union. Tvardovsky acknowledged the guilt he felt about his father in his late poem "By Right of Memory" (1968).

Tvardovsky’s father was a well-read and intelligent man who often read to Aleksandr and the rest of the family. From an early age Aleksandr became familiar with the works of Alexander Pushkin, Nikolai Gogol, Mikhail Lermontov, Nikolay Nekrasov and others. He began composing poetry while still very young. At age 13 he showed some of his poems to a young teacher who gave him misleading criticism, telling him that poetry should be written as unintelligibly as possible. His first published poem was "A New Hut", which was printed in the newspaper Smolensk Village. After its publication he collected his poems and showed them to the poet Mikhail Isakovsky. Aleksandr later acknowledged Isakovsky’s influence, saying that he had been the only Soviet poet who had had a beneficial effect on him.

He left the village school because of poverty after attending only four classes and entirely devoted himself to literature. At the age of 18 he went to Smolensk, but was unable to find literary work. In the winter of 1930, after visiting Moscow, he returned to his native village. During this period he entered a Pedagogical Institute with the help of a party official, but didn’t finish his studies there. He completed his education later at the Institute of History, Philosophy and Literature in Moscow. His poem The Land of Muravia was written in 1934-36 and was favorably received by the critics. This poem, along with his other early narrative poem The Road to Socialism (1931), were products of Tvardovsky’s effort to come to terms with collectivization. He was awarded the Stalin Prize for The Land of Muravia.

In 1939 he participated in the march into Western Belorussia, and in the Winter War, where he was part of a "writer’s brigade" composing patriotic verse. He joined the Communist Party of the Soviet Union in 1940 and was a war correspondent during World War II. Early in the war he began independently working on his poem Vasili Tyorkin. During the post-war years he served as chief editor of Novy Mir, an influential literary journal. He became the chief editor of Novy Mir in 1949. He was dismissed from his post in 1954 for publishing officially unacceptable articles by V. Pomerantsev, Fyodor Abramov and M. Shcheglov. He was made chief editor again in July, 1958. Tvardovsky fought hard to maintain the traditional independence Novy Mir had, even against official disapproval. During his editorship, the magazine published Ilya Ehrenburg’s Thaw in 1954, The Vologda Wedding by Alexander Yashin in 1962, and One Day in the Life of Ivan Denisovich by Aleksandr Solzhenitsyn in 1962.1972 Britannica Book of the Year (covering events of 1971), "Obituaries 1971" article, page 532, "Tvardovski, Aleksandr Trifonovich" item During those years, the journal Oktyabr’, with the editor in chief Vsevolod Kochetov, was the pro-Soviet, anti-Western and anti-liberal counterpart of Tvardovsky’s Novy Mir.

In 1963 Tvardovsky published a short satirical poem entitled "Tyorkin in the Other World", where Tyorkin finds out that hell is a lot like every day life in the Soviet Union. In 1970, Tvardovsky resigned from Novy Mir, although he was awarded the Order of the Red Banner "for services in the development of Soviet poetry" that same year and the State Prize for Literature in the year of his death, 1971, in Moscow.

Tvardovsky received the Stalin Prize (1941, 1946, 1947), the USSR State Prize (1971), and the Lenin Prize (1961) for the big poem Distance After Distance (За далью – даль 1950-60), a collection of poetic impressions and meditations on Russian life first conceived during a trip on the Trans-Siberian Railway.