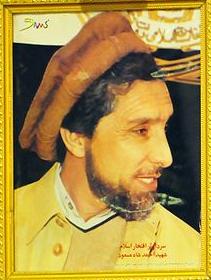 Ahmad Shah Massoud ( Aḥmad Šāh Masʻūd; 1953–2001) was a political and military leader in Afghanistan. He was a central figure in the resistance against the Soviet occupation between 1979 and 1989 and in the following years of civil war. He was assassinated on September 9, 2001.

Massoud came from an ethnic Tajik, Sunni Muslim background from the Panjshir valley in northern Afghanistan. He studied engineering at Kabul University in the 1970s, where he became involved with Muslim anti-communist movements around Burhanuddin Rabbani. After the Soviet occupation of 1979, his role as an insurgence leader earned him the nickname of "Lion of Panjshir" (). In 1992, he was appointed as the minister of defense through the Peshawar Accord, a peace and power-sharing agreement, in the post-communist Islamic State of Afghanistan—a position he held until 2001. He fought against an alliance of militias led by Gulbuddin Hekmatyar and eventually the Taliban, who started to lay siege to the capital in January 1995.

Following the rise of the Taliban in 1996, Massoud, who rejected the Taliban’s fundamentalist interpretation of Islam, returned to the armed opposition. He served as the military and political leader of the United Islamic Front (also known in the West as Northern Alliance). He was assassinated, probably at the instigation of al-Qaeda, in a suicide bombing on September 9, 2001, just two days before the September 11 attacks in the United States, which led to the US and NATO to intervene in Afghanistan, allying with Massoud’s forces.

Massoud was posthumously named "National Hero" by the order of Afghan President Hamid Karzai. The date of his death, September 9, is observed as a national holiday known as "Massoud Day" in Afghanistan., Lonely Planet Travel Guide. His followers call him Āmir Sāhib-e Shahīd ("Our Beloved Martyred Commander").

Massoud’s byname, "Lion of Panjshir" ( "Shir-e-Panjshir"), earned for his role during the Soviet occupation, is a rhyming play on words in Persian, as the name of the valley means "five lions".

The Wall Street Journal referred to Massoud as "The Afghan Who Won the Cold War", referring to the global significance of the Soviet defeat in Afghanistan for the subsequent collapse of the Eastern Bloc.

In the spring 2001, Ahmad Shah Massoud had addressed the European Parliament in Brussels, saying that Pakistan was behind the situation in Afghanistan. He also said that he believed that, without the support of Pakistan, Osama Bin Laden, and Saudi Arabia, the Taliban would not be able to sustain their military campaign for up to a year. He said the Afghan population was ready to rise against them. Addressing the United States specifically, he warned that should the U.S. not work for peace in Afghanistan and put pressure on Pakistan to cease their support to the Taliban, the problems of Afghanistan would soon become the problems of the U.S. and the world.

Declassified Defense Intelligence Agency (DIA) documents from November 2001 show that Massoud had gained "limited knowledge… regarding the intentions of [Al-Qaeda] to perform a terrorist act against the US on a scale larger than the 1998 bombing of the US Embassies in Kenya and Tanzania."Defense Intelligence Agency (2001) report http://www.gwu.edu/~nsarchiv/NSAEBB/NSAEBB97/tal31.pdf They noted that he warned about such attacks.