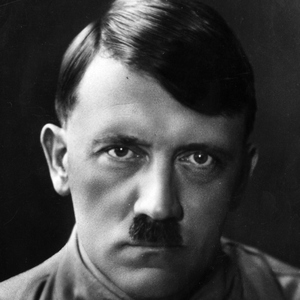 Alexander the Great, Attila, Timur, Napoleon, Stalin were great people, who left traces in the world history, founded empires and destroyed whole nations. Adolf Hitler can be safely reckoned among this cohort.

He was born on the 20th of April in 1889. A prevalent opinion that Hitler had a surname Schicklgruber is most likely incorrect. His father Alois was born out of wedlock but had the surname of his stepfather Johann Georg Hiedler. A mistake in writing of the word “Hiedler” is commonly connected with carelessness of a priest who made a formal entry in the book of birth registration. Adolf was born in his father’s third marriage. To conduct this marriage Hitler’s parents had to secure Vatican’s permission because Hitler’s father and his third wife were immediate family. Adolf was the third child in this marriage, his mother Klara gave birth to six children. Alois Hitler died in 1903.

In 1895 Adolf began to receive primary education in public school of town Fischlham, but after two years of his education his mother who was a very religious woman sent Adolf to the Benedictine monastery to study at the parochial school. Mother hoped that Adolf would become a priest. But the boy was expelled from the school because a mentor saw him smoking in the garden. From 1900 to 1904 Adolf studied in the real school in Steyr. At the age of sixteen Adolf gave up school and devoted two years to reading books, walking and painting. Mother begged him to pass exams for the fourth grade in order to get a certificate instead of a note and to continue education. He received the certificate but his marks were very low.

At the beginning of 1907 Adolf’s mother underwent a serious operation. As soon as she recovered and got stronger Adolf went to Vienna to have entrance examinations to enter The Academy of Fine Arts. But Hitler didn’t pass the second round of examinations when he had to paint portraits. He obtained a meeting with the chancellor and he was advised to occupy himself with architecture as the chancellor saw the young man’s architectural talent. In November Hitler returned to Linz and undertook charge connected with caring for dying mother. She died on the 21st of December and after he settled proceedings connected to inheritance and registration of pension to his sister and himself Hitler went to Vienna where in September of 1908 he tried to enter The Academy again but he experienced failure in the first round of examinations.

After that Hitler repeatedly changed place of residence and he didn’t tell anybody his address to avoid involuntary service in the army. Later he claimed vindicatorily that he didn’t want to serve with Jewry and Czech for Habsburgs’ state but he was ready to die for German Reich. He kept going with accidental earnings by selling his pictures, designing signboards and advertising announcements. At the age of twenty four Hitler arrived in Munich and lived in this city till the beginning of World War I.

The war started on the 1st of August in 1914 and it actually gladdened Hitler. He immediately filled the application to enter the army and was sent to 16th reserve Bavarian regiment. In October he fought on the Western front and took part in battles of the Yser and Dnieper. Hitler got the rank of corporal much faster than his brother-soldiers. He was decorated with Iron Cross 2nd Class for the battle in Flanders. After Flanders he took part in battles of Neuve Chapelle, La Bassee and Arras. In 1916 Hitler got a shrapnel injury in thigh and spent a year in infirmary, after that he returned to his regiment. In 1917 Hitler was decorated with Cross 3d Class, and in 1918 he received Iron Cross 1st Class for bravery.

Hitler always considered that the reason of Germany’s defeat was betrayal of policy-making.

In 1919 when Hitler returned in Munich he kept a neutral position between German communist council and government. In June he was sent to study at the courses of agitators to work with soldiers returning from the front against Bolsheviks. Hitler showed very outstanding agitator talent and after one of discussions and his anti-Semitic speech he was appointed to be the officer of army education. On the 12 of September in 1919 Adolf Hitler came to the meeting of German Workers’ Party. His victory in argument was so convincing that Anton Drexler, the founder of the party, suggested him joining the party. Hitler became responsible for propaganda of Nazi party.