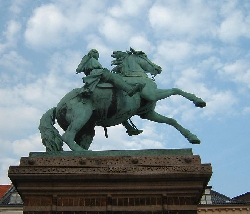 Absalon or Axel ( – 21 March 1201) was a Danish archbishop and statesman, who was the Bishop of Roskilde from 1158 to 1192 and Archbishop of Lund from 1178 until his death. He was the foremost politician and churchfather of Denmark in the second half of the 12th century, and was the closest advisor of King Valdemar I of Denmark. He was a key figure in the Danish policies of territorial expansion in the Baltic Sea, Europeanization in close relationship with the Holy See, and reform in the relation between the Church and the public. He combined the ideals of Gregorian Reform ideals with loyal support of a strong monarchical power.

Absalon was born into the powerful Hvide clan, and owned great land possessions. He endowed several church institutions, most prominently his family’s Sorø Abbey. He was granted lands by the crown, and built the first fortification of the city that evolved into modern-day Copenhagen. His titles were passed on to his nephews Anders Sunesen and Peder Sunesen. He died in 1201, and was interred at Sorø Abbey.

Saxo Grammaticus’ Gesta Danorum was not finished until after the death of Absalon, but Absalon was one of the chief heroic figures of the chronicle, which was to be the main source of knowledge about early Danish history. Absalon left a legacy as the foremost politician and churchfather of Denmark in the 12th century. at Gyldendals Åbne Encyklopædi Absalon was equally great as churchman, statesman and warrior. His policy of expansion was to give Denmark the dominion of the Baltic for three generations. That he enjoyed warfare there can be no doubt; yet he was not like the ordinary fighting bishops of the Middle Ages, whose sole indication of their religious role was to avoid the shedding of blood by using a mace in battle instead of a sword. Absalon never neglected his ecclesiastical duties, and even his wars were of the nature of crusades.

In the 2000s, "Absalon" was adopted as the name for a class of Royal Danish Navy vessels, and the lead vessel of the class. HDMS Absalon (L16) and Esbern Snare (L17) were launched and commissioned by Denmark in 2004 and 2005.http://forsvaret.dk/2ESK/ENHEDER/FS/ABSL/Pages/default.aspx naval-technology.com In December 2008, HDMS Absalon was involved in the rescue of putative Somali pirates 90 miles off Yemen in the Gulf of Aden. The craft from Somalia was reported to hold rocket-propelled grenades and AK-47 assault rifles, and to have been adrift for several days. Also per the report, the Absalon took the sailors and weapons aboard, sunk the craft, and turned the sailors over to the Yemen coast guard. The Absalon, according to The New York Times report, "was deployed in the Gulf of Aden [in] September [’08] as part of an international effort to curb piracy," by Alan Cowell, The New York Times part of Combined Task Force 150.

Absalon was a close counsellor of Valdemar, and chief promotor of the Danish crusades against the Wends. During the Danish civil war, Denmark had been open to coastal raids by the Wends. It was Absalon’s intention to clear the Baltic Sea of the Wendish pirates who inhabited its southern littoral zone which was later called Pomerania. The pirates had raided the Danish coasts during the civil war of Sweyn III, Canute V, and Valdemar, to the point where at the accession of Valdemar one-third of Denmark lay wasted and depopulated. Absalon formed a guardian fleet, built coastal defenses, and led several campaigns against the Wends. He even advocated forgiving the earlier enemies of Valdemar, which helped stabilize Denmark internally.

[[Laurits Tuxen: Bishop Absalon topples the god Svantevit at Arkona in 1169.]] The first expedition against the Wends that was conducted by Absalon in person, set out in 1160. These expeditions were successful, but brought no lasting victories. What started out as mere retribution, eventually evolved into full-fledged campaigns of expansion with religious crusader motives. In 1164 began twenty years of crusades against the Wends, sometimes with the help of German duke Henry the Lion, sometimes in opposition to him.