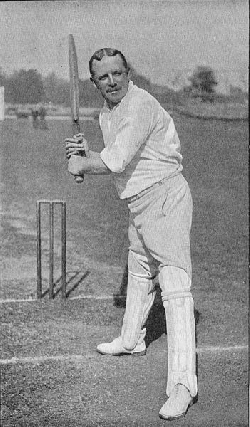 Albert Neilson Hornby, commonly designated A. N. Hornby, nicknamed Monkey Hornby (Blackburn, Lancashire, 10 February 1847 – 17 December 1925 in Nantwich, Cheshire) was one of the best known sportsmen in England during the nineteenth century excelling in both rugby and cricket. He was the first of only two men to captain the country at both rugby and cricket but is also remembered as the England cricket captain whose side lost the Test match which gave rise to the Ashes, at home against the Australians in 1882. Additionally, he played football for Blackburn Rovers.

He was the sixth son of William Henry Hornby, a cotton mill proprietor and director of the Lancashire & Yorkshire Railway who was Member of Parliament (MP) for Blackburn from 1857 to 1865. His brothers, Edward and William, were also MPs for Blackburn from 1869 to 1874, and from 1886 to 1910 respectively. Edward and another brother Cecil also played first-class cricket. Albert attended Harrow School and from there returned to Lancashire to join the family business.

As well as becoming captain of the national side for both cricket and rugby, Hornby was also selected to play for Blackburn Rovers in their inaugural game at Alexandra Meadows, against Partick Thistle on 2 January 1878. He played for them in a few subsequent matches.

Whilst at Harrow, his family had moved to Shrewbridge Hall, Nantwich, Cheshire, and he first played cricket for that county in 1862 and played in 20 matches between then and 1876. His club cricket was for the East Lancashire Club, Blackburn and he was first tried for Lancashire County Cricket Club in 1867. It was with his county that he was to play his finest cricket. He went on to play for Lancashire for 33 years, 17 as captain (in 1879–1893 and 1897–1898). For many years he provided an ideal attacking foil to the careful defence of his opening partner, Dick Barlow, with whom he was immortalised in one of the best known of all cricket poems, At Lord’s by Francis Thompson which contains the following lines:

His lack of stature and excess of energy earned him the nickname "Monkey" whilst at school and this stuck, while his players called him "The Boss", for his martinet approach to captaincy. In all cricket sources, however, he is referred to by his initials, and never by a nickname. His prowess as a forceful front-foot player, was matched by his fielding abilities. Between 1870 and 1881 he was the only player for Lancashire to reach a century for the club, which he did on seven occasions and in 1881 he topped the national averages, with his 1531 runs including three centuries.

Hornby was unable to carry his county form with the bat into the Test arena, his 3.50 average being a testament to this fact. In his debut Test on the 1878–79 Australian tour he lost his wicket in both innings to Spofforth and this was to be repeated in his next Test in 1882. The Test match in 1882 was a one-off game played at The Oval in London, England, and the English cricket team lost it to Australia by seven runs. In response, the Sporting Times printed the following "obituary" to English cricket: In Affectionate Remembrance of ENGLISH CRICKET, which died at the Oval on 29th AUGUST, 1882, Deeply lamented by a large circle of sorrowing friends and acquaintances R.I.P. N.B. – The body will be cremated and the ashes taken to Australia. Thus was born the greatest rivalry in cricket which to this day is known as The Ashes. AN Hornby captained England in only one more Test (his last), standing in for Lord Harris (who had stood out in protest) in the first Test of 1884. The match was played at Old Trafford on 10, 11 and 12 July 1884 and was drawn. Hornby avoided Spofforth but his 0 and 4 in the two innings remained undistinguished.