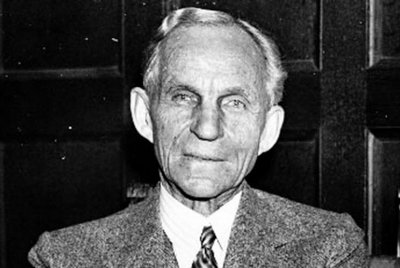 Henry Ford is a world-famous manufacturer who is known not only because of his foundation of one of the most successful automobile corporation, but also because of his invention of industrial conveyor. It is thanks to his work that nowadays a whole lot of goods are available for us since conveyor manufacturing much more than any other factor decreases the cost of the final product.

Nevertheless, despite huge significance of his figure for the world economy, Henry Ford was (according to words of his contemporaries) a fairly unpleasant man to talk to. Journalists kept making up different insulting epithets that could describe his character – they called him a tyrant, a miser, and even a heartless little old man. Naturally, journalists had their reasons to call him so scornfully. In the first place, Ford always set a product above a person and he made the latter labour days and nights by the sweat of their brows in contempt of no excuses or pretexts. Our world, the world of today is called the world of consumption due to Henry Ford. In the second place, the manufacturer adhered to the Nazi view of life, and that fact never really helped him to gain the love of public, the public which is strict and unyielding never fail to blame a person for his sins and drawbacks.

Actually, besides bad traits of character, Henry Ford had one special trait and probably no one with a single exception of Mark Twain could engage in competition with him. That was his unbelievable sparkling and inspired sense of humour.

Henry Ford couldn’t help resorting to some kind of a good joke in order to gain his company’s favour. He could insinuate into the confidence of a criticizing journalist or discontented complaining worker.

Today we know numerous stories, both fascinating and edifying, which occurred in life of this American manufacturer.

In the middle of the thirties of the last century news was spread all across the Soviet Union 0- news about the foremost man in industry, a front-rank worker – a miner and a record breaker Alexei Stahanov, who managed to work 102 tons of coal in the coal-face during one shift! As a result, he exceeded the daily work quota by fourteen times. The whole Soviet manufacture took the idea of exceeding daily work quota with joy and inspiration and it created the so-called ‘Stahanov’s movement’.

News concerning unprecedented results of Alexei Stahanov’s work finally got to America. So one time, during an interview, a journalist who worked in a well-known newspaper asked Henry Ford a question: ‘How would you, a world-famous manufacturer and the genius of commercialism react to the news that you’ve got a worker in your factory who is capable of exceeding daily work quota by fourteen times?’. Henry Ford answered immediately without further thinking: ‘I would fire…I would fire those people who had established such daily work quotas that can be exceeded by fourteen times!’.

The second story is connected with the most famous of Henry Fords’s brainchildren – an automobile with the mark ‘T’.

When Henry Ford made his automobile he didn’t really think much about their names. His first automobile was called ‘Ford A’, and his second one was called ‘Ford B’. It might seem a lit bit strange but in fact he Henry called his third model of automobile ‘Ford C’. So that was why, with no further complications, he continued naming them in such a way and finally he got to model ‘Ford T’.

It is worth mentioning that at that times an automobile was pure luxury (and surely not everyone could afford it). It was not means of transport as it was too expensive and unprofitable. Soon Henry Ford realized that the market demands mass production of rather cheap cars. That was why the young company had to establish strict rules and principles of tough economy in the manufacturing process. A black paint cost much cheaper than other paints and besides it dried out a little bit faster – so car bodies of the most popular and available models ‘Ford T’ were painted only in black. When correspondents asked the manufacturer whether they could order the model ‘Ford T’ with another colour (more vivid and attractive, for instance green or red) Henry answered: ‘You may have the model ‘Ford T’ of any colour, but only on condition that this any colour is black’.

The old man Ford was a very shrewd person and once he noted with the air of a philosopher: ‘People surrender more often than they suffer a defeat’.