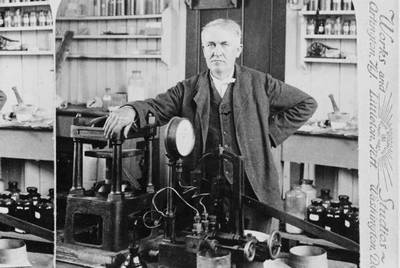 Thomas Alva Edison went down in history as the owner of the largest number of patents among all of the famous scientist of the world. During his long life this great inventor succeeded in patenting not less than five thousand various devices. To become famous it was enough for Edison to invent an electric incandescent lamp and then with no worries bathe in the rays of fame. But there was no stopping of the inventor’s open and genius scientific mind, and he diligently went on, upgrading the telegraph, the telephone, the cinematographic instrumentation, and also inventing the electric chair. It was him who decided that people should say ‘hello’ in the beginning of a telephone conversation.

Only deaf people and those who are often woken up in the morning because of the loud Rammstein music, can disagree with the fact that phonograph is one of the Edison’s most interesting inventions. The great inventor introduced this devilish machine to the scientific community at the conference that took place in the French Academy on the 11th of March, 1878.

A famous physicist Teodore de Morsel who sincerely respected the scientist’s talent, invited him to give a speech at the Academy. Edison’s colleague, a Hungarian engineer, Tivadar Pushkash by name, decided to be the chief of demonstration. Tivadar Pushkash was quite an inventor, too – he actually invented the first in the world central telephone exchange, which was designed for twenty telephone subscribers.

Naturally, after all the common phrases prescribed by etiquette such as ‘could you be so kind as to show’ or ‘I’m honoured to present to you’ the engineer begins to demonstrate to the respectful scientists and experts how that suspicious device makes noises. Pushkash pays special attention to the fact that during the sound record playback the needle which is moving down the groove transfers vibrations to the resilient membrane. This is how the sound is being born.

In the beginning the meeting went very well indeed. But soon it turned out that not all of the distinguished representatives of the French science appreciated a revolutionary invention at its true value. Someone even suspected that they were being deceived and that the trick was too cheap to buy it. During the demonstration there occurred a rather funny incident due to this utter disbelief.

The professor of philology Jean Buiar distinguished himself at the demonstration. As soon as the sound of a human voice came out of the magic box, that gentleman all of a sudden swiftly rushed towards Teodore and began suffocating him furiously. He seemed to have lost control but soon raging words followed his actions ‘ You’re a worthless scoundrel! Do you expect us to believe in that? Of course it is this ventriloquist who has tried to fool us. How could have trust in this fraud, who wants to convince us that filthy lucre is able to reproduce the noble beauty of the human speech?’.