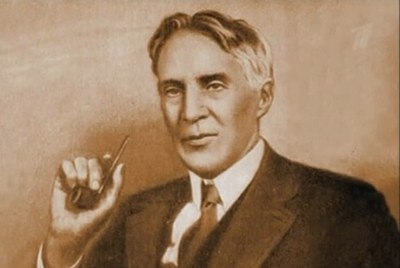 Robert Williams Wood is an American physicist, a gifted experimenter and a man with the sense of originality.

‘He behaved like a boy’ stated his contemporaries and those who took part in his childish pranks confirmed it. This titled scientist conducted researches in physical optics, the sphere of multiple interesting experiences and fascinating discoveries. When he was a boy, Robert didn’t think about optics that much. While other children were playing with toy cars and slingshots Wood was carrying out lots of experiments with pyrotechnics, committing arsons and explosions of different power. His parents and close relatives were scared to death because of the boy’s dangerous way of entertainment. Robert wasn’t even too scornful to play such a mischievous nasty prank as cleansing a spectroscope with a cat.

In the distant 1897 Robert Wood got a job as a teacher of physics. It was actually a post with a prefix ‘junior lecturer’ and it didn’t bring in good money, but still it was something a twenty-nine year old married man with two children could stick to. Interestingly enough, at that time Robert Wood wasn’t acquainted with the sphere of physics that would soon bring him fame and fortune. There was one time when he played a part of a satan in some play. He was passing along Afro-Americans who were settled on the benches next to their stores. He faked coughing and without being noticed Robert spitted in the puddle, secretly adding a little bit of sodium to the puddle. All of a sudden the thunder roared, puffs of steam floated into the air and bright sparks flashed by. The audience was shocked at this, everybody nearly believed Robert to be a true real-life devil and the owners of the stores drove away the gapers so that they could flee and be ‘out of danger’.

The university of Wisconsin was well-known for it academic way of teaching. Since Wood had experience in risky experiments he decided to make some revolutionary changes in the technical part of laboratories. Surely, deep inside his heart he remained to be a playful boy, who still had a knack for bringing into life any bold ideas that came to mind and were stuck there like splinters. He could easily involve as many admirers as it was possible in his new pranks. Sometimes he acted like an elephant in the china shop, accidentally breaking various physical instruments in the laboratory.

His lectures were extremely captivating, his students always looked forward to attending his classes, and soon after a couple of experiments Wood became quite a popular person at university. The lecturer’s obsession seemed to be contagious, as more and more followers acknowledged his authority. Wood’s lectures won him immense prestige and even students who learnt humanities and knew nothing about the mysteries of physics began to attend his lessons.

At the university there were carried out experiments in creating artificial tornadoes and charming mirages. Everyone considered these experiments to be most wonderful and worth strong and sincere admiration. Sometimes when a day is sultry we can observe a light haze hanging over the heated asphalt. If we look at the surface of the road from a special angle, we can also observe a ideal imitation of water surface which reflects the sky and surrounding objects. Wood happened to notice this phenomenon during a long morning stroll in San Francisco. He was walking with his children along the extended straight pavement when he noticed the mirage so distinct that he managed to take a photo of his offsprings against the background of this miracle. Before this discovery people used to think that such physical abstractions could only be generated on some large areas of heated sand in the desert.

Robert made up his mind to create his own oasis. He took plain sheets made of iron sized 80×20 centimeters and fixed them together with their smaller sides. Thus, a smooth ground long enough for the experiment was made. Wood even took care of the aesthetic perception of the experiment, cutting out of paper several palms and mountains and putting a mirror that reflected the sky outside the window on the other side of the metal sheet. He located this paper landscape on the sand (which concealed the surface of the metal sheet from view) and under the metal strip he set gas burners which heated the surface instead of the sun. Then the experimenter achieved to maintain certain temperature there appeared a lake right next to the edge of the deserted landscape. There were reflections of mountains and palms in the lake, and it mirror-like surface was calm. It looked very much alike the natural lake. Students made a huge fuss of their favorite professor, they all were thunderstruck by this vivid example of the physical phenomenon. The older generation called Wood ‘a magician’ putting in this new nickname their utter admiration and some faint notes of patronage towards the mischievous kid.

The ‘great hooligan’ hidden inside Robert’s heart liked to come to life from time to time, and the professor was often up to something really reckless. Once he decided to test the effects of drugs on himself and he took a considerable dose of a rather weak substance. After falling out of a trance he suddenly remembered that deep inside his subconsciousness some discovery had been born but he couldn’t remember any details and there was no clue. So Robert Wood made up his mind to repeat the experiment and this time he was armed with a pencil and paper. He nearly lost the bond with reality, but he succeeded in writing a short phrase on the paper. When Robert came down from the drug he couldn’t wait to read the note. It said ‘A banana is big, buts its skin is bigger’.