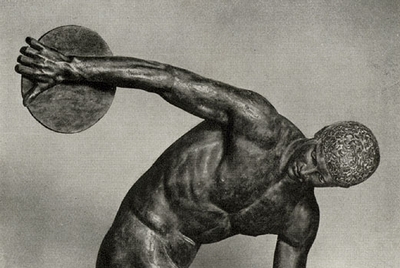 The name of Polykleitos became nominal among great quantity of sculptors of Ancient Greece long ago. When this name is mentioned anyone who is interested in art is sure to remember his immortal creations – the statue of Doryphoros and the statue of Diadumenos. These statues were in fact the summit of Polykleitos’ creative work. This great sculptor was taught the craftsmanship of sculpturing by Ageladas Argos himself. It is curious that another great sculptor of Ancient Greece Phidias was taught by the same master.

Polykleitos displayed a passion for harmony and perfection even in his early childhood. Thus it’s no wonder that he had tried to express his vision of harmony by all means ever since he started to learn the craftsmanship of sculpturing. Polykleitos was the first who decided to put Pythagoras’ mathematical researches into practice, realizing them in sculptures, calculating the exact correlation of different elements and parts of body, and also bringing into correlation separated parts of body and a general length of the statue. Sometimes for Polykleitos thinking over the composition and the position of statue’s body took much more time than the process of sculpture itself. Such a punctilious method of approaching couldn’t but remain unnoticed.

Unfortunately, at the beginning of Polykleitos’ creative development, a young sculptor didn’t manage to escape thorough criticism – criticism which was sharp, hard on the target and sometimes even just stupid.

Thus, despite the fact that even the very first works of the sculptor were quite daring and one could feel good inclinations of a great creator, the harmony of bodies and symmetry, still there were always a lot of critics standing in the way. It is common knowledge that critics are people who can’t doing something but they like to criticize with zeal and judge severely those who can actually do this ‘something’. Some specialists in the field of human psychology claim that critics are driven by plain envy.

Once Polykleitos, who was sure that his sculptures were harmonic and great, got bored with hearing reproaches and remarks of any critic (even third-rate and worthless ones), he made up his mind to carry out one labour-intensive and fundamental experiment. During several months he secretly, hiding from curious eyes, was sculpting two statues. The great master paid much attention to them during their creation, he strive for ideality. His hard labour came to an end and success crowned his efforts – these two statues were actually very beautiful. Everything indicated that the statues were sculpted by the hand of a genious – symmetry, harmony, composition. The sculptor’s cunning plan consisted in the fact that both statues were as like as two peas.

After finishing his work, Polykeitos hid one of the statues safely in his studio, and exposed another so that everyone could view it as long as they wanted to. Days and nights all sorts of critics, experts and connoisseurs of art crowded in front of this new statue, giving advice to one of the best sculptors of the world. Polykleitos didn’t prove anything to critics this time, didn’t explain anything about symmetry or exact mathematical calculation. He just remade the sculpture in such a way as all those critics asked him to.

Several months later the statue was remade completely (critics displayed their own vision of a great beauty). Another one was still in the sculptor’s studio – he cautiously and with care concealed from view in the dark of his studio – so beautiful, undamaged and untouched. Finally Polykleitos exposed the two statues so that the Greek could compare the original ad the one which was remodeled.

People made wry faces and curled their lips when looking at the first statues and they only wondered where the sculptor had found enough courage and foolishness to expose such an abominable statue. But then again they all agreed with each other on the fact that the second statue which stood nearby was really beautiful and harmonious.

When Polykleitos saw such a reaction, he announced: ‘The first statue you can safely and wth every reason call your own work, since it became like this due to your recommendations, hints and pieces of advice. And the second one can be considered to be truly mine.