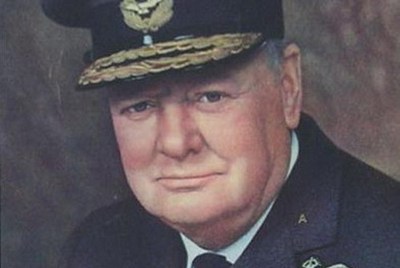 One of the brightest curious incidents which are connected with Winston Churchill is his outrages escapade that happened during his carrying on negotiations with Franklin Roosevelt. To be more precise, the British prime minister distinguished himself not during the negotiations but in his private conversation with Roosevelt.

The thing is that the way these two people met each other was quite unexpected. The president of America Roosevelt entered the hotel room which belonged to Churchill and was struck dumb. He had good reasons for that – Churchill was taking a bath, thus he was absolutely naked. He noticed the guest who appeared in front of him and raised to his feet. He explained the absence of clothes: ‘I am the British prime minister and I’ve got nothing to hide from the President of America.’ Perhaps Roosevelt (somewhere deep inside) understood the humour of this situation and appreciated the prime minister’s joke, but Churchill’s hand which was put out for the president to shake was left hanging in the air.

Still we can’t claim that this incident affected badly the relationship between America and Great Britain. On the contrary, several researchers (among them is David Reynolds, the professor in Cambridge university and one of the leading ‘Churchill experts in the world) claim that it was this Winston Churchill’s brave acts that became one of the base foundations of close collaboration of the USA and Great Britain, the collaboration that has lasted for such a long time. It is possible that they were right, considering that Churchill was in fact an incomparable figure on the international political arena.