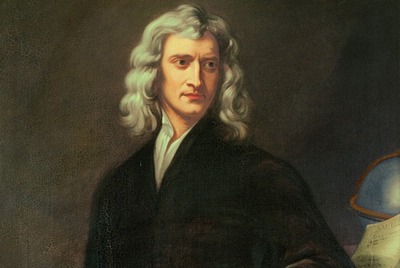 Newton: head in the clouds

Newton was in fact a recognized authority during his lifetime. To everybody’s surprise he envied malignantly his colleagues with the same occupation and he always dreamt of being the first and the best in everything.

For instance, he used to argue with famous German philosopher and mathematician Gottfried Leibniz about differential calculus. The question was who appeared to be the first one to discover and start using differential calculus. Even so, Newton was sure that the end justifies the means and while arguing with somebody, heated with dispute, he could let himself resort to rude words and even condescend to very low-down tricks. You should imagine his joy when he got to know the news about Leibniz’s death! It is worth mentioning that such behaviour of sir Isaac evoked proper response in the world of science of that time. The court astronomer of the English Queen John Flamstead even claimed in warm blood that he dreams of Newton’s turning up his toes.

Naturally, Newton had his own affections- actually, there were not many of them, only two. The first one was his niece, and the second and the last one was his little puppy Daymond. The scientist loved the little puppy so much that when Daymond accidentally dropped a candle and the most precious of Newton’s works and manuscripts were burnt in fire the only thing he did was a small reproach: ‘Oh, my dear dear Daymond! You’ll never realize what you have done!’

Little Newton was raised without a father, but he managed to compensate for his not too cheerful childhood by constant childish pranks and mischievous tricks. Isaac thought nothing of modeling a paper lantern, putting a lighted candle in it and tying the whole construction to a cat’s tail let it all out of the house in the darkness of the street. Passers-by were scared to death when they saw it. They even didn’t notice a cat – they thought it was a comet sweeping past. The curious fact is that comets had been considered to be extremely ill omens from the earliest times. People thought comets portended bad times ahead. Against such a background frolics with tied keys and people running and trying to get to them loop pretty innocent.

Not any person can manage to switch off and not to worry about any of your personal problems while working – but sir Isaac did it perfectly, he was able to concentrate on his work and think of nothing else but the goal he tried to achieve. Once he was found in the kitchen with a chicken egg in his hand. Newton was carefully examining the egg. There was a pot boiling next to him. And that was half the trouble: while Newton satisfied his curiosity by examining the egg, there was a watch inside the pot sadly boiling .

Thomas More added to one of his diaries a new funny story about Newton. That story was probably the most characteristic of the great scientist. Once Newton invited his friend doctor Stacli to dinner but as soon as he came he totally forgot about his presence. Stacli saw Newton absolutely aloof, as though he was in another world at that moment. Nobody knew (and will never know!) what the scientist was thinking of at that time but it was only one man who had dinner that night. The doctor waited for a while and then he realized that neither dinner nor Newton didn’t deserve so much time of waiting – and do he ate his dinner all by himself. When doctor Stacli was standing up to leave Newton came to his senses, looked around himself, examined the table and without paying any attention to his friend he muttered: ‘It’s amazing! If not for these direct evidence I could have sworn I haven’t ate my dinner yet!’.

The scientists of today suppose that Newton’s works and researches will be very topical for many decades ahead, maybe even for many centuries. If not for Isaac Newton, we don’t know whether the science nowadays would be so highly developed. Both great scientist’s genius mind and his absent-mindness came down to history forever. It seems we know everything about him but…

Richard Westfall, who is rightfully considered to be the best researcher of Newton’s biography, noted: ‘The more facts I get to know about Newton the more puzzled I get. It’s like he’s slipping away from me all the time’.